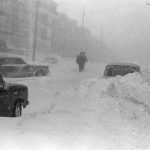 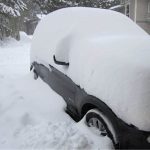 As the United States is in the grip of a fierce snow storm, I am reminded of another snow storm that happened February 21 – 23, 1971. The storm is considered Oklahoma’s extreme storm. This blizzard buried northwestern Oklahoma under as much as three feet of snow, and that doesn’t include the drifting. The town of Buffalo was the hardest hit. They reported 23 inches of snow on the 21st alone, and a state-record snow depth of 36 inches by the morning of the 24th. The northern part of the state was just buried.

Oklahoma tends to be a mild weather state, with temperatures in December, January, and February averaging in the 50s. This week is the anniversary of the 1971 blizzard, which was likely the most intense winter storm ever to hit the Sooner State, although the current storm might rival it now. With the current storm, Oklahoma is seeing temperatures averaging -6°. The prior record was in 1909 at 7°. The power company had had to implement rolling blackouts to assure that the power grids don’t fail. I don’t think they have received the amount of snow with the current storm, but the severity is very similar, when you think about it. Anytime a storm is is bad enough to shut things down, especially the power, it is severe.

When the blizzard of 1971 finally ended, 36 inches of snow was measured in Buffalo, which was the state’s record for the highest snowfall total, but the snow drifts measured as high as 20 feet tall. While northwestern Oklahoma was hit very hard, just a short distance to the west in the Oklahoma Panhandle, only light snow fell with Boise City receiving only 3 inches and only 2 inches in Kenton. The 1971 storm put ranchers in a precarious position until C-124s from the Oklahoma Air National Guard dropped 150 tons of hay to stranded Oklahoma cattle. Local cattleman flew along with the aircraft to guide the aircrews to the stranded cattle. The massive loss numbers of 15,000 in livestock accounted for much of the $2 million in damages. 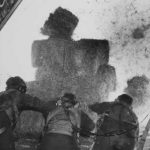 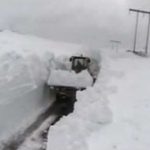 The vicious storm became known as the 84-hour blizzard. It actually occurred across the eastern half of the Texas and Oklahoma Panhandles. The storm his the worst un Oklahoma, but in the region, 8 deaths were reported…7 in Pampa, 1 in the Oklahoma Panhandle. The average drifts were 10 to 20 feet. Storms like these will not likely be soon forgotten, if they are ever forgotten. People are really never prepared for such cold temperatures and so much snow in the southern states. We can try to prepare, but when year after year goes by without such a sever storm, we soon become complacent, until the next one hits us, that is.

4 Responses to The 84-Hour Blizzard