The Butcher Of Lyon 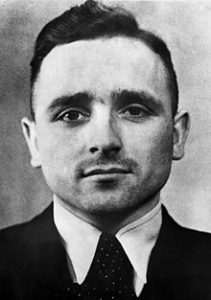 The Third Reich was filled with people who were nothing less than monsters. Klaus Barbie, the former Nazi Gestapo chief of German-occupied Lyon, France, was one of them. As chief of the secret police in Lyon, Barbie sent 7,500 French Jews and French Resistance partisans to concentration camps, and executed some 4,000 others. He, like the other Nazi officers had no compassion…just a heart filled with hatred. Barbie wasn’t happy with just having them killed, he personally tortured and executed many of his prisoners himself. In 1943, he captured Jean Moulin, the leader of the French Resistance, and had him slowly beaten to death. He took pleasure in the suffering of that good man. In 1944, Barbie rounded up 44 young Jewish children and their seven teachers hiding in a boarding house in Izieu and deported them to the Auschwitz extermination camp. Of the 51 people deported, only one teacher survived. In August 1944, as the Germans prepared to retreat from Lyon, he organized one last deportation train that took hundreds of people to the death camps. He didn’t want to “lose” a single one to the liberation.

Like all cowards, Barbie returned to Germany after the war, and began his disguise. He burned off his SS identification tattoo and assumed a new identity. This was planned as the Germans began to realize that they had lost the war. The plan was to smuggle these former SS officers out of the country, so they could “regroup later, and start the Third Reich or a facsimile of it in the future. After the Americans offered him money and protection in exchange for his intelligence services, Barbie surrendered himself to the US Counter-Intelligence Corps (CIC) and engaged in underground anti-communist activity in June 1947. Barbie worked as a US agent in Germany for two years, and the Americans shielded him from French prosecutors trying to track him down.

That frustrates me, but I suppose they figured it was the lesser of the two evils. They could go after the “bigger fish” in the organization. In 1949, Barbie and his family were smuggled by the Americans to South America.

Once he was in Bolivia, Barbie assumed the name of Klaus Altmann. He settled in Bolivia and continued his work as a US agent. He became a successful businessman and advised the military regimes of Bolivia. In 1971, the oppressive dictator Hugo Banzer Suarez came to power, and Barbie helped him set up brutal internment camps for his many political opponents. During his 32 years in Bolivia, Barbie also served as an officer in the Bolivian secret police, participated in drug-running schemes, and founded a rightist death squad. He regularly traveled to Europe, and even visited France, where he had been tried in absentia in 1952 and 1954 for his war crimes and sentenced to death. He was so bold, thinking that he was invincible, but as it is in most criminals, they get careless. In 1972, the Nazi hunters Serge Klarsfeld and Beatte Kunzel discovered Barbie’s whereabouts in Bolivia, but Banzer Suarez refused to extradite him to France.

In the early 1980s, a liberal Bolivian regime came to power and agreed to extradite Barbie in exchange for French aid. His protection gone, on January 19, 1983, Barbie was arrested. He arrived in France on February 7, 1983. Unfortunately, the statute of limitations had expired on his in-absentia convictions from the 1950s. He was going to have to be tried again. At this point, the United States government formally apologized to France for its conduct in the Barbie case later that year. Even then, because of legal wrangling between the groups representing his victims, the trial was delayed for four years. Finally, on May 11, 1987, the “Butcher of Lyon,” 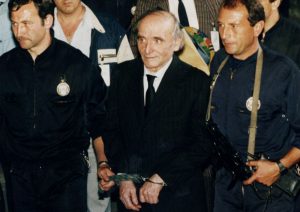 as he was known in France, went on trial for his crimes against humanity. His defense attorneys, three minority lawyers…an Asian, an African, and an Arab, actually made the dramatic case that the French and the Jews were as guilty of crimes against humanity as Barbie or any other Nazi. That was a completely unbelievable atrocity of a defense. Barbie’s lawyers seemed more intent on putting France and Israel on trial than in proving their client’s innocence. Their efforts failed and on July 4, 1987, he was found guilty. For his crimes, the 73-year-old Barbie was sentenced to France’s highest punishment…to spend the rest of his life in prison. He died of cancer in a prison hospital in 1991.