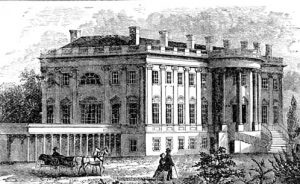 It was a long time coming. An actual house for the President of the United States was a long time coming. Prior to establishing the nation’s capital in Washington DC, the United States Congress and its predecessors had met in Philadelphia (Independence Hall and Congress Hall), New York City (Federal Hall), and a number of other locations (York, Pennsylvania; Lancaster, Pennsylvania; the Maryland State House in Annapolis, Maryland; and Nassau Hall in Princeton, New Jersey). Then, it was decided that our government needed a permanent home. Washington DC was selected.

The first president who would have an actual government-owned home in Washington DC was President John Adams, and he would only live there for the last year of his only term in office. President John Adams, in the last year of his only term as president, moved into the newly constructed President’s House on November 1, 1800. The President’s House was the original name for what is known today as the White House. Adams and his wife had been living in temporarily at Tunnicliffe’s City Hotel near the half-finished Capitol building since June 1800, when the federal government 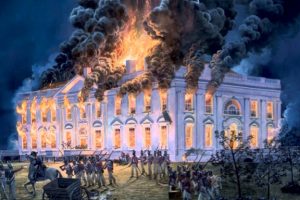 was moved from Philadelphia to the new capital city of Washington DC. When Adams first arrived in Washington, he wrote to his wife Abigail, who was still at their home in Quincy, Massachusetts, that he was pleased with the new site for the federal government and that he had explored the soon-to-be President’s House and liked it.

Although workmen had rushed to finish plastering and painting walls before Adams returned to DC from a visit to Quincy in late October, the construction was still unfinished when Adams rolled up in his carriage on November 1. However, the furniture from their Philadelphia home was in place and a portrait of George Washington was already hanging in one room. It was a decent start. The next day, Adams sent a note to Abigail, who would arrive in Washington later that month, saying that he hoped “none but honest and wise men [shall] ever rule under this roof.” I wish that 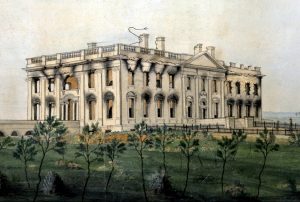 had always been the case, and of course the idea of good and bad presidents are often a matter of opinion.

The President’s House though new had its issues. Adams was initially very pleased with the presidential mansion, but he and Abigail found it to be cold and damp during the winter. Abigail wrote to a friend saying that the building was tolerable only so long as fires were lit in every room. She also said that on a funny note, she also said that she had to hang their washing in an empty “audience room,” which is the current East Room. Now, that’s quite a thought. During the War of 1812, the White House was set on fire by the British, and had to be repaired.

One Response to The President’s House