Death Was The Best Option 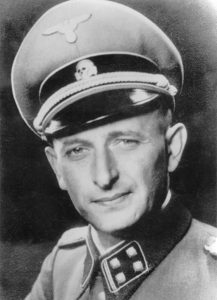 When Hitler decided that the time in his “final solution” had come to transport the Jews, Gypsies, and other “undesirables” to the death camps, he chose to transport them in cattle cars on a train. Hitler had so little compassion for human life, that when the people were loaded into the cattle cars, they were packed in tightly with as many 80 people to a car. They couldn’t sit down. The air was stifling. The trains didn’t stop for bathroom breaks or food. The people had to stand there hour after hour, for up to four very long days. Hitler and his men didn’t care, they didn’t even consider the people to be human, and to make matters worse, they thought it a good thing if the people just died en route, because it would save them the hassle, ammunition, and poison needed to kill them later.

I suppose that for Hitler and the Nazis, the plan was one of simple logistics of transporting millions of people to southern Poland. Some of the people came from as far away as the Netherlands, France, Italy, and Greece. Transportation was done occasionally in passenger trains, in which wealthy Jews were encouraged to bring as much of their wealth with them as possible. Oh course, the Jews thought they would be able to keep their belongings, but in reality, this was railway robbery, because their wealth was soon to be transferred to the Nazis. Where they were going, they would not need their property.

The transports of the Jews to Auschwitz went of daily, on schedule. They leave from the ghetto embarkation depots, on schedule. The process was very methodical…almost mechanical, or robotic. Those in charge had no compassion for the people being herded into the cattle cars. The conductors signaled, “All aboard.” The brakemen waved lanterns. Anyone who resisted was shot by German and Hungarian guards. Guards used clubs and bayonets to herd a last group of mothers into the compartments. Finally, the engineer opens the throttle, and right on schedule, the train is off for Auschwitz.

Eighty Jews in every compartment was the average, but Eichmann boasted that the Germans could do better where there were more children. With the children in the groups, they could jam 120 into each train room. The Jews had to stand all the way to Auschwitz…with their hands raised in the air…because that made room for the maximum number of passengers. Each compartment had two buckets…one containing water, and the other to use as a toilet, to be shoved by foot, if possible, from user to user, not that anyone could use their hands to facilitate waste elimination. Many just had to relieve themselves where they stood, through their clothing. The water buckets made no sense either, because one water bucket for over eighty people for four days, would never be enough, if they could figure out a way to get the water from the bucket to their mouths. Still, no one could say the Nazis were cruel…after all, the buckets were there, right? In the four days that it took to get to Auschwitz, many, if not all of the prisoners were dead, standing up, because in the tight quarters, the dead 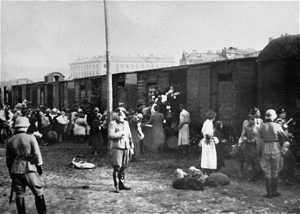 could not even fall. Those who survived were to face an worse fate than dying on the train. They faced slavery, forced experimentation, and finally the gas chambers. Children were separated from parents, men from women, and the elderly simply sent straight to the gas chambers. People were mutilated, poisoned, beaten, forced to stand outside naked in the bitter cold of winter or in the heat of summer, crammed into quarters with no heat or blankets, and starved to death on a mere 700 calories or less a day. Death was the best option.