The Angels Of Bataan 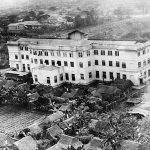 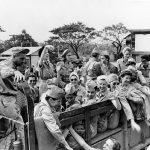 When we think of Prisoners of War during the world wars, we usually think of the prisoners as being men, but there were women too…nurses. At that time, women couldn’t be in combat positions, and if they wanted to serve their country, it had to be as nurses or medics. One group of United States Army Nurse Corps and United States Navy Nurse Corps nurses, were stationed in the Philippines at the outset of the Pacific War, were later dubbed the Angels of Bataan (also including the the nurses of the island of Corregidor), were also called the Angels of Bataan and Corregidor and the Battling Belles of Bataan. The 78 nurses served during the Battle of the Philippines (1941–42). When Bataan and Corregidor fell, 11 Navy nurses, 66 army nurses, and 1 nurse-anesthetist were captured and imprisoned in and around Manila. These loyal, patriotic women continued to serve as a nursing unit while prisoners of war, taking care of their fellow prisoners, even if it meant punishment for their actions.

After the attack on Pearl Harbor, the Japanese immediately went after the Philippines and the military personnel based there, including the nurses. In late December 1941, many of the nurses were assigned to a pair of battlefield hospitals on Bataan named Hospital #1 and Hospital #2. These hospitals included the first open-air wards since the Civil War. Tropical diseases, including malaria and dysentery, were widespread among both hospital patient and staff. Just prior to the fall of Bataan on April 9, 1942, the nurses serving there were ordered to the island fortress of Corregidor by General Wainwright (commander of the forces in the Philippines after MacArthur was ordered to Australia). Wainwright tried to save as many people as he could by moving them to the safer island of Corregidor. In the end it made no difference, because Corregidor was captured too.

During their occupation of the Philippines, the Japanese commandeered the campus of the University of Santo Tomas and converted it to be the Santo Tomas Internment Camp. In addition to its civilian population, Santo Tomas became the initial internment camp for both the army and navy nurses, with the army nurses remaining there until their liberation, while the soldiers were taken on the Bataan Death March. While there, the nurses continued to take care of anyone they were allowed to. Under the supervision of Captain Maude C Davison, a 57 year old nurse, with 20 years of service experience, the nurses continued to do their jobs. Davison took command of the nurses, maintained a regular schedule of nursing duty, and insisted that all nurses wear their khaki blouses and skirts while on duty.

The number of internees at Santo Tomas Internment Center in February 1942 amounted to approximately 4,670 people, of whom 3,200 Americans. Of those 3,200 Americans, 78 were nurses. The Americans, anticipating the war, had sent many wives and children of American men employed in the Philippines to the states before December 8, 1941. A few people had been sent to the Philippines from China to escape the war in that country. Some had arrived only days before the Japanese attack. The prisoners were crowded 30 to 50 people per small classrooms in university buildings. The allotment of space for each individual was 16 to 22 square feet. Bathrooms were scarce. Twelve hundred men living in the main building had 13 toilets and 12 showers. Lines were normal for toilets and meals. Internees with money were able to buy food and built huts, “shanties,” of bamboo and palm fronds in open ground where they could take refuge during the day, although the Japanese insisted that all internees sleep in their assigned rooms at night. Soon there were several hundred shanties and their owners constituted a “camp aristocracy.” The Japanese attempted to enforce a ban on sex, marriage, and displays of affection among the internees. They often complained to the Executive Committee about “inappropriate” relations between men and women in the shanties.

The conditions at Santo Tomas were horrific. The biggest problem for the internees was sanitation, followed closely by starvation. The Sanitation and Health Committee had more than 600 internee men working for it. Their tasks included building more toilets and showers, laundry, dishwashing, and cooking facilities, disposal of garbage, and controlling the flies, mosquitoes, and rats that infested the compound. Then, in January 1944, control of the Santo Tomas Internment Camp changed from Japanese civil authorities to the Imperial Japanese Army, with whom it remained until the camp was liberated. Food, which had been scarce before, was reduced to only 960 calories per person per day by November 1944, and then to 700 calories per person per day by 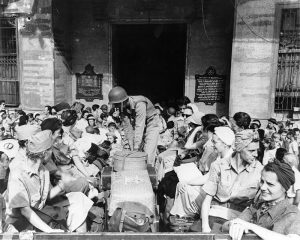 January 1945. At the time the nurses were finally released, it was found that they had lost, on average, 30% of their body weight during internment, and subsequently experienced a degree of service-connected disability “virtually the same as the male ex-POW’s of the Pacific Theater.” Davison’s body weight dropped from 156 pounds to 80 pounds.

Finally, General Douglas MacArthur, emboldened by the success of the Raid at Cabanatuan, ordered Major General Vernon D Mudge to make an aggressive raid on Santo Tomas in the Battle of Manila in 1945. The internees at Santo Tomas, including the nurses, were liberated on February 3, 1945, by a “flying column” of the 1st Cavalry.