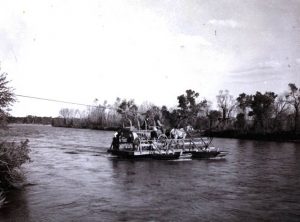 Trips across the United States in the mid-1800’s were slow and often treacherous. The trips were taken on wagons pulled by horses or oxen. It took months to get across the nation, and many people did not make it. Illness, Indian attacks, heat, cold, or animal bites, all served to cause problems, but one of the worse dangers was water. Of course, water could be bad and filled with bacteria, but more importantly, water, in the form of rivers could make crossing extremely dangerous and sometimes deadly. Rivers that were swift or deep, could mean the end for wagons, animals, and for people.

One such danger, located on the Oregon Trail, where emigrants made their way to Oregon, California, and Utah, was the North Platte River near present day Casper, Wyoming. In those days, there were many people looking to make a living in something besides the gold industry, which wasn’t always successful for the majority of people, so they set up things like commercial ferries to transport wagon trains across the treacherous rivers, like the North Platte River. It was a safer way to cross the rivers, to be sure, but it was also expensive, and so many people tried to cross on their own. Mostly due to their inexperience, many people lost everything trying to cross, sometimes even their lives. Many emigrants, unwilling to pay, tried to fashion their own “ferries,” with varying success. Until bridges were built, nearly all travelers swam their livestock across, and many people and animals drowned in the swift, deep, shockingly cold water of the Platte.

From present-day central Nebraska to South Pass in west-central Wyoming, emigrants to California, Oregon and Utah all took more or less one route. Most of the wagon trains came up the south side of the Platte from Fort Kearney. They crossed the South Platte in western Nebraska where the river forks, and continued west, going up the south side of the north fork. This route meant that they would have to ford the Laramie River where it joined the North Platte at Fort Laramie. Then, finally they could cross the North Platte itself 150 miles later, where the river turned to go to the south near present Casper. Once they made the treacherous North Platte River crossing, the travelers could continue on to the west. There was simply no other way to get there from the East at that time in history.

Routes changed periodically, including crossings at Red Buttes, west of Casper during fur-trade times in the 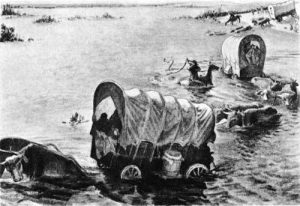 1820s and 1830s. Crossing points varied more and more during the mid-1840s, including along 25 miles of river from the mouth of Deer Creek, at present-day Glenrock, Wyoming to Casper, Wyoming. Many people crafted small boats by emptying their wagons, removing the wagon box from the running gear, caulking the boxes water tight with tar, dismantling the running gear into pieces, and then ferrying everything across the water in the wagon boxes. Wow!! What a long drawn out, time consuming way to build a boat. Them they used poles or oars for guidance and often using ox or human power to tow the craft across the water with long ropes. This was a fairly reliable method, as I said very slow due to the unloading, dismantling, and reloading.