A Unique Kind Of Hero 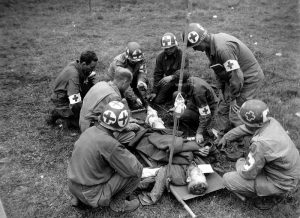 Wearing a white armband with the red cross signifying that a soldier is a medic, did not guarantee their safety in combat. Bombs raining down from the sky could not distinguish the target as a medic when they fell, nor could bullets shot from the guns of the enemy. Nevertheless, they ran into the line of fire at the cry of, “Medic!!” Of course, they were scared. They knew that, at that moment, their life expectancy was about one minute. They had to dodge the bullets and bombs just to do their job. Most of us can’t imagine the fear they must have felt. Still, in that moment, they were the only thing standing between the wounded soldiers and certain death. Soldiers were stunned to see a medic running through the machine gun fire just to put a tourniquet on the battered arm of the wounded soldier. The medic risked his own life to save the lives of others.

The medics received the same combat training as the other infantrymen, but they didn’t carry a weapon. Imagine finding yourself in the middle of a war zone and all you have with you is a first aid kit. The idea, I’m sure, is that the soldiers will protect the medics, but can they really. The soldiers are fighting for their own lives. It’s not that they don’t want to protect the medics or their fellow soldiers, but rather that they can’t. They are too busy fighting off the enemy.

Often the men who went in as medics were volunteer conscientious objectors. I don’t know if they realized that a conscientious objector didn’t get out of the war, but rather just didn’t get a gun…for shooting or for protection. Something like that would make me reconsider conscientious objection. I’m not one that wants to kill people, but self defense is another thing entirely. When medics went through their training, the other soldiers were rather negative toward them, often calling them “pill pushers,” but all their disdain disappeared when they saw the medics in action on the battlefield. The medics were right there beside the soldiers in the 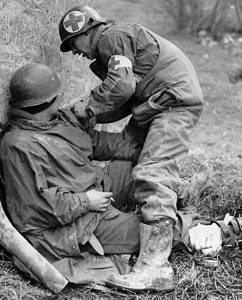 foxholes. They were with them as they advanced during offensives. Then, while the fighting raged, they went between lines attending to the wounded. They disregarded the danger to themselves, and did their duty. The tools of their trade were limited. Often their examination would be followed with a tourniquet and a morphine injection, before cleaning the wound and sprinkling sulfa powder on it. Then they bandaged the wound and dragged the wounded soldier off the field…all in a matter of minutes or less.

Medics were protected by the Geneva Convention, but the Red Cross that was displayed on their helmet, was a practice that was abandoned during the Vietnam War. Believe it or not, the cross on the helmet became a target for the enemy. By then, medics also had weapons…just for protection, but my guess is that they were probably glad they had it, but not so in World War II. Armed or not, many were severely injured or killed while attending to the wounded, and that made them a unique kind of hero.