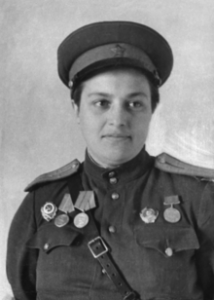 Lyudmila Mikhailivna Pavlichenko was a Soviet sniper in the Red Army during World War II, credited with 309 confirmed kills. Her record made her the most successful female sniper in history. Lyudmila was nicknamed “Lady Death” due to her incredible ability with a sniper rifle and her high kill count. She served in the Red Army during the Siege of Odessa and the Siege of Sevastopol, during the early stages of the Eastern Front in World War II. Born Lyudmila Mikhailovna Belova on July 12, 1916 in Bila Tserkva, Russian Empire (located within present-day Ukraine). Her mother was a teacher and her father was a Saint Petersburg factory worker.

In June 1941, when Pavlichenko was 24 years old and in her fourth year studying history at Kiev University, Germany began its invasion of the Soviet Union. Pavlichenko was among the first round of volunteers at the Odessa recruiting office, where she requested to join the infantry. The registrar really wanted her to be a nurse, but she refused. She surprised her superiors, and after they saw that she had completed multiple training courses, they finally let her in the army as a sniper. Pavlichenko was assigned to the Red Army’s 25th Rifle Division. She became one of 2,000 female snipers in the Red Army. The number sounds large, but female soldiers were still just 2% of the Red Army’s total number. Of the 2,000 female snipers, only about 500 survived the war. Pavlichenko was given only a frag grenade due to weapon shortages, although she was in a combat role. On August 8, 1941 a fallen comrade handed her his Mosin-Nagant model 1891 bolt-action rifle. She finally had a real weapon, and with it she achieved her first two kills and proved herself to her comrades. She described this event that made her officially a sniper, her “baptism of fire.”

Pavlichenko fought for about two and a half months near Odessa, where she recorded 187 kills. She was promoted to Senior Sergeant in August 1941, when she reached 100 confirmed kills. At age 25, she married a fellow sniper whose name was Alexei Kitsenko. Unfortunately, soon after the marriage, Alexei was gravely wounded by a mortar shell. He died from his injuries after a few days in the hospital. When the Romanians gained control of Odessa on October 15, 1941, Pavlichenko’s unit was withdrawn by sea to Sevastopol on the Crimean Peninsula, where she fought for more than eight months. In Sevastopol, Pavlichenko trained almost a dozen snipers, who killed over a hundred Axis soldiers during the battle. In May 1942, newly promoted Lieutenant Pavlichenko was cited by the Southern Army Council for killing 257 Axis soldiers. Her total of confirmed kills during World War II was 309, including 36 enemy snipers. In June 1942, Pavlichenko was hit in the face with shrapnel from a mortar shell. After her injury, the Soviet High Command ordered that she be evacuated from Sevastopol by submarine. They didn’t want to lose this valuable, perfect example of Soviet womanhood. She spent around a month in the hospital, after which she expected to go back to the Eastern Front , but she didn’t. Instead she became a propagandist for the Red Army. She also trained snipers for combat duty till the end of the war in 1945.

In 1942, Pavlichenko was sent to Canada and the United States for a publicity visit. Her mission was to convince the allies to start a second front against Nazi Germany. When she visited the United States, she became the first Soviet citizen to be received by a US President, as Franklin D. Roosevelt welcomed her to the White House, and later she toured with Eleanor Roosevelt across America, relating her experiences as a female soldier on the front lines. Unfortunately, Pavlichenko was not taken seriously by the press during her tour, but was referred to as the “Girl Sniper.” I can’t imagine how the press could possibly connect a sniper with girlish innocence. She was dumbfounded by the kind of questions reporters put to her in Washington, DC. “One reporter even criticized the length of the skirt of my uniform, saying that in America women wear shorter skirts and besides my uniform made me look fat.” They also asked if she used makeup on the front line. She was described by the reporters as very blunt and unemotional in her responses. Pavlichenko appeared before the International Student Assembly being held in Washington, DC, attended the meetings of the Congress of Industrial Organizations, and made appearances and speeches in New York City and Chicago. In New York City, she was given a raccoon fur coat by Mayor LaGuardia. In Chicago, she stood before large crowds, chiding the men to support the second front. “Gentlemen,” she said, “I am 25 years old and I have killed 309 fascist invaders by now. Don’t you think, gentlemen, that you have been hiding behind my back for too long?” Her words settled on the crowd, then caused a surging roar of support. 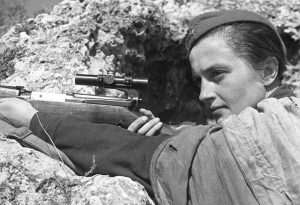 On Friday, November 12, 1942, Pavlichenko visited Coventry, accepting donations of £4,516 from local workers to pay for three X-ray units for the Red Army. She also visited Coventry Cathedral ruins, then the Alfred Herbert works and Standard Motor Factory, from where most funds had been raised. She had inspected a factory in Birmingham earlier in the day. Having attained the rank of major, Pavlichenko never returned to combat, but became an instructor and trained Soviet snipers until the war’s end. In 1943, she was awarded the Gold Star of the Hero of the Soviet Union, as well as the Order of Lenin twice. Lyudmilla Pavlichenko died on October 10, 1974, at the age of 58 years in Moscow, Soviet Union due to a stroke. She was a beloved hero of the Soviet Union.