On January 3, 1923, the suspension bridge at Kelso, Washington was nearly finished…but it had not yet been opened, and the old bridge was still in use. The old bridge was just that…old, and they knew it, but until the new bridge was open, the old bridge was all they had. Both bridges spanned the Cowlitz River. Kelso was a small town, with a population of less that 2,000 people on the day in 1923.

On that day, the bridge, which was a major roadway in the area was experiencing a traffic jam, due to a stalled car in the middle. To further complicate matters, there was a crowd of people in the area who had gathered to watch a log jam. The combined congestion on the bridge caused the cable that held the bridge up give way. Approximately 100 people were thrown into the flooded and rushing river. The collapse happened at night, making rescue and recovery very difficult. No bodies were

located that first night, and 20 to 30 people were said the be missing. About the same number of people had been rescued from the river with various injuries. To further complicate matters, a transformer in the electric plant had blown out, so there were no electric lights.

Two piers of heavy piling provided the foundations for the structure, which was of a bascule suspension type, this construction being necessary because of the fact that the Cowlitz is a navigable waterway. The two lift portions of the bridge meeting at the center were suspended by steel cables from two high wooden towers. With the exception of the steel cables the entire bridge was of wood. The collapsed span of the bridge had been supported by the cables, and when one of the supporting piers buckled under the weight of the traffic, the 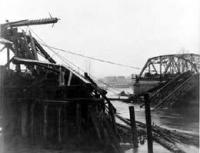 whole bridge went down. Normally the Cowlitz River is a narrow stream, but in times of high water, the river becomes very swift. In this sad instance, heavy rains had flooded the river.

The town of Kelso was in chaos shortly after the crash. People were frantically searching for friends and family. Many rushed to the hospital in search of their people. I they didn’t find them there, they rushed back to the river. Adding to the chaos was the current blackout in the town. At one hospital an operation upon an accident victim was in progress as the lights there flickered. Those who were injured had a long road to recovery, and that was just from their injuries. Still, they were blessed. They lived.

One Response to Too Late