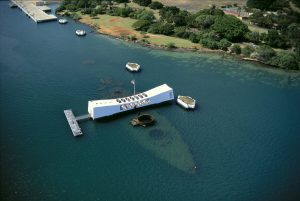 Probably the most notable memorials of the December 7, 1941 attack on Pearl Harbor, is the Arizona Memorial, which floats atop the sunken ship USS Arizona, which sank during that attack, taking with it 1,177 men. In all, the Japanese attack on Pearl Harbor, took the lives of 1998 navy personnel, 109 Marines, 233 army personnel and 48 civilians that were killed in that bombing which resulted in 2,402 soldiers killed and 1,282 military personnel and civilians wounded. Over half of the fatalities of that dreadful day occurred on the USS Arizona.

The USS Arizona had one more situation that would make it unique…in a tragic way. There were 38 sets of brother stationed on the USS Arizona. The brothers totaled 79 men. Of these 79 brothers, 63 lost their lives that day. There were three sets of three brothers: the Beckers, the Dohertys, and the Murdocks. Only one of each of the sets of three survived. Of the 38 sets of brothers on the USS Arizona, 23 complete sets were lost. There was also a father/son set on the USS Arizona…both of whom were killed in the attack. This is in no way to say that any of the other people killed in the Pearl Harbor attack of December 7, 1941 were less important that these brothers or the father and son set, because they weren’t. Every person that served when out nation was brutally attacked that day, gave their lives for their country. The brothers serving was unusual, in that the military tries not to place siblings together,

lest they both be killed, but these men requested this. They liked having their brother there with them. I can understand that. Long months away from family can be very lonely.

The explosion and subsequent fires on the USS Arizona killed 1,177 sailors and marines instantly. The entire front portion of the ship was destroyed, because the fire burned everything in its path. To make matters worse, the fires continued for 2½ days, causing the bodies that were there to be cremated before anyone could located and removed. Out of a crew of 1,511 men on the USS Arizona, only 334 survived. Of the dead, only 107 were positively identified, due to the immense fire. The remaining 1,070 casualties fell into three categories: (1) Bodies that were never found; (2) Bodies that were removed from the ship during salvage operations and were severely dismembered or partially cremated that identification was impossible. DNA testing was unheard of in 1941. These bodies were placed in temporary mass graves, and later moved and reburied and marked as unknowns, at the National Memorial Cemetery of the Pacific (Punchbowl) in 1949; and (3) Bodies located in the aft (rear) portion of the ship. These remains could have been recovered, but were left in the ship due to their unidentifiable condition. The injuries to these bodies indicated that most of these crew members died from the concussion from the massive explosion. 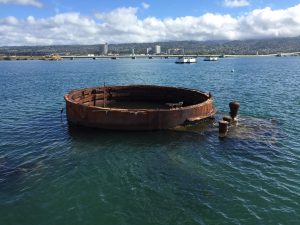 Everyone of the people who lost their lives on December 7, 1941, at Pearl Harbor, were heroes. Their families were left to mourn their loss, mostly without the closure that can be found when there is a body to bury. The horrific attack marked the inevitable entrance of the United States into World War II, and if the Japanese thought they could beat the United States with this sneak attack, they soon found out just how wrong they were. They had awakened the “sleeping giant” and they would be sorry they did. Today we honor all those who dies at Pearl Harbor, but also, all who survived and went forward to avenge their fallen comrades. We will never forget their sacrifice. We are forever grateful.

One Response to Twenty Three Sets Of Brothers