Every four years, Americans go to the polls to elect a new president. Looking at the first time that a president is elected, quite often, we know little about the person running for president. Even if they have been in Congress, it takes some digging to really discover who they are, and what they can do for our nation. We rely on things like the political party they belong to or the campaign promises they make. Still, we have no idea what the candidate will really do, until they are in office.

Sometimes, there are exceptions to that basic rule, however. Such was the case with Dwight D Eisenhower, who was the supreme commander of Allied forces in Western Europe during World War II. Of course, running a nation is not the same as running a war, unless the nation happens to be at war, that is. Nevertheless, a commander who excelled at leading a war, was by definition, a leader…making it a good bet that he could also lead a nation. Eisenhower was that kind of leader, and the people of the United States could see it clearly. He led the massive invasion of Nazi-occupied Europe that began on D-Day…June 6, 1944. Then in 1952, with victory under his belt, leading Republicans convinced Eisenhower, who by then was in command of NATO forces in Europe, to run for president. As the campaign progressed, it would remain to be seen, just how much the people of the United States thought that he would make a good leader for the nation. The election would be the telling point.

And so it went. Eisenhower won a convincing victory over Democrat Adlai Stevenson and would serve two terms in the White House (1953-1961). Even more amazing than his victory was the fact that General Dwight D Eisenhower won the American presidential elections with the largest number of popular votes ever recorded for a presidential candidate. It was a landslide victory. The people had spoken. Also of note, is that Eisenhower was the only other president to win the presidential election, having never served in any other political office. I’m sure everyone knows that the other president to do that is our current president…Donald Trump. That is an almost unheard of feat. A general and a businessman, both of whom had not been politically inclined, and yet, here they were. During his presidency, Eisenhower managed Cold War-era tensions with the Soviet Union under the looming threat of nuclear weapons, ended the war in Korea in 1953 and authorized a number of covert anti-communist operations by the CIA around the world. Here at home, America was in a period of relative prosperity, nevertheless, Eisenhower strengthened Social Security and created the massive new Interstate Highway System. Eisenhower was so well liked that he would beat Stevenson again four years later in a landslide to win re-election, despite health concerns after suffering a heart attack in 1955. 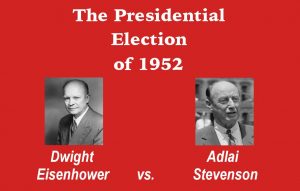 Eisenhower was born in Denison, Texas, on October 14, 1890. He grew up in Abilene, Kansas, as the third of seven sons in a poor family. His mother, a devout Mennonite and pacifist, was quite distressed when young Ike…as he was known…won an appointment to the US Military Academy at West Point, New York. Nevertheless, he went on to graduate in the middle of his class in 1915. While stationed as a second lieutenant in San Antonio, Texas, Eisenhower met Mamie Geneva Doud. The couple married in 1916 and had two sons, Doud Dwight, who died of scarlet fever as a small child, and John. World War I ended just before Eisenhower was scheduled to go to Europe, which was frustrating to the young officer, but he soon managed to acquire an appointment to the Command and General Staff College at Fort Leavenworth, Kansas. Graduating first in his class of 245, he served as a military aide to General John J Pershing, commander of US forces during World War I, and later to General Douglas MacArthur, US Army chief of staff. During his seven years serving under MacArthur, Eisenhower was stationed in the Philippines from 1935 to 1939.

Eisenhower returned soon after Nazi Germany’s invasion of Poland sparked the outbreak of World War II in Europe. In September 1941, he received his first general’s star with a promotion to brigadier general. After Japan attacked Pearl Harbor that December, US Army Chief of Staff General George C Marshall called Eisenhower to Washington, DC to work as a planning officer. Beginning in November 1942, Eisenhower headed Operation Torch, the successful Allied invasion of North Africa. He then directed the amphibious invasion of Sicily and the Italian mainland in 1943 that led to the fall of Rome in June 1944. In early 1943, he was made a full general. Eisenhower was appointed supreme commander of the Allied Expeditionary Force in December of that year and given the responsibility of spearheading the planned Allied invasion of Nazi-occupied Europe. On D-Day…June 6, 1944, more than 150,000 Allied forces crossed the English Channel and stormed the beaches of Normandy. The invasion led to the liberation of Paris on August 25 and turned the tide of the war in Europe decisively in the Allied direction. Having risen from lieutenant colonel in the Philippines to supreme commander of the victorious forces in Europe in only five years, Eisenhower returned home to a hero’s welcome in 1945 to serve as chief of staff of the US Army. 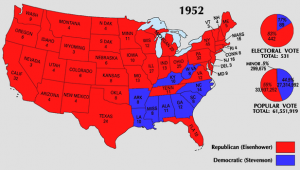 return to civilian life ended in 1950, however, when President Harry S Truman asked him to take command of the new North Atlantic Treaty Organization (NATO) forces in Europe. In that position, Eisenhower worked to create a unified military organization that would combat potential communist aggression around the globe. As President of the United States, while weathering criticism from both left and right, Eisenhower enjoyed high approval ratings throughout his administration. After leaving office in January 1961, he retired to his farm in Gettysburg, Pennsylvania. He worked largely on his memoirs, and would publish several books over the following years. He died on March 28, 1969, after a long illness.