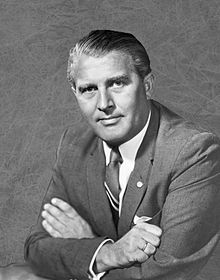 There is good that comes from science, and there is bad too, unfortunately. Things like weapons of warfare would most likely fall into the bad that comes from science. Still, weapons are necessary, and maybe it isn’t the weapon that is bad, but rather the user. Wernher von Braun was a rocket scientist in Hitler’s Germany. His job was to build bigger and more dangerous weapons. The V-2 missile was the culmination of von Braun’s work so far. On October 3, 1942, von Braun tested the V-2 missile. The missile was fired successfully from Peenemunde, as island off Germany’s Baltic coast. It traveled 118 miles in that test; and later, in evil weapon style, it proved extraordinarily deadly in the war. The V-2 missile was the precursor to the Intercontinental Ballistic Missiles (ICBMs) of the postwar era.

German scientists, led by von Braun, had been working on the development of these long-range missiles since the 1930s. I don’t know if von Braun was doing this work by choice, which would make him very likely as evil as the weapons of destruction he made, or whether, like so many of the German people under Hitler’s evil rule, he simply had no say in the matter. Whatever the case may be, von Braun was good at what he did. The science, which clearly must have fascinated him, was a work to which he was well suited. He understood it. He knew how to make it do hat he wanted it to do, and become what he wanted it to become…or, at least what he was told to make it become. Still, it took time to perfect. Three trial launches had already failed. The fourth in the series, known as A-4, 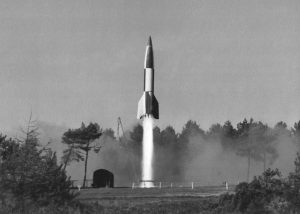 finally saw the V-2, a 12-ton rocket capable of carrying a one-ton warhead, successfully launched. I wonder just how much pressure was on von Braun at that fourth launch attempt. Could it have cost him his life, or his freedom, if he did not successfully create this weapon that Hitler wanted so badly.

The V-2 was unique in several ways. First, it was virtually impossible to intercept, making it a serious threat to anyone it was aimed at. Upon launching, the missile rises six miles straight up. Then, it proceeds on an arced course, cutting off its own fuel according to the range desired. The missile then tips over and falls on its target-at a speed of almost 4,000 miles per hour. That would make it extremely difficult to blow up in flight, since hitting something moving at that speed would take serious accuracy, and heat seeking missiles were not developed yet. The missile hits with such force that it burrows itself several feet into the ground before exploding. In addition, the missile had the potential of flying a distance of 200 miles, and the launch pads were portable, making them impossible to detect before firing.

September 6, 1944 became the first real use of the V-2, when two missiles were fired at Paris. On September 8, two more were fired at England, which would be followed by more than 1,100 more during the next six months. More than 2,700 British citizens died because of the rocket attacks. After the war, both the United States and the Soviet Union captured samples of the rockets for reproduction. They also captured the scientists 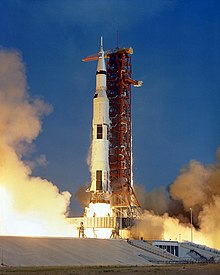 responsible for their creation. Following the war, von Braun was secretly moved to the United States, along with about 1,600 other German scientists, engineers, and technicians, as part of Operation Paperclip. He worked for the United States Army on an intermediate-range ballistic missile program, and he developed the rockets that launched the United States’ first space satellite Explorer 1.

His group was assimilated into NASA, where he served as director of the newly formed Marshall Space Flight Center and as the chief architect of the Saturn V super heavy-lift launch vehicle that propelled the Apollo spacecraft to the Moon. He also advocated for a human mission to Mars. In 1967, von Braun was inducted into the National Academy of Engineering and in 1975, he received the National Medal of Science. Von Braun died on June 16, 1977 of pancreatic cancer in Alexandria, Virginia at age 65. He was buried at the Ivy Hill Cemetery. His gravestone quotes Psalm 19:1: “The heavens declare the glory of God; and the firmament sheweth his handywork” (KJV).