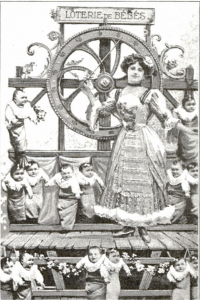 It sounds like something straight out of the annals of criminal behavior, but while it is strange, the authorities decided that it wasn’t illegal. Everyone knows that the adoption process, and the cost involved can make it almost impossible for many parents to adopt a child, but in late 1911, Parisians seeking to become parents could do things the regular way. Or they could take a more unusual option offered to them that year: A baby lottery. That’s right a baby lottery.

In January 1912, a foundling hospital, which was actually a children’s home, decided to hold “a raffle of live babies.” The hospital’s management check on the legalities and once they received the go-ahead, the plan went forward. The plan was two-fold. They wanted to find homes for these sweet abandoned babies, and they wanted to raise funds for the children’s home and other charitable institutions.

To protect the innocent babies, “An investigation of the winners was made, of course, to determine their desirability as foster parents.” By modern standards, this sort of thing feels bizarre and crazy, not to mention neglectful. But, as John F Ptak points out in his blog post about the lottery, “in comparison with some bitter early histories of the want of tenderness in the care of children, and keeping in mind the great leap forward in the creation of the foundling hospitals and what they represented in the face of not having anywhere for unwanted and impossible babies to go, the idea of the lottery for cute babies in 1912 doesn’t look so bad when placed in its historical context…With the terrible history of infanticide and exposure not too dimly removed from this time, the lottery seems far less horrible than its antiquarian components.” I would agree. While the idea was odd, it was similar to the Orphan Trains, with the exception of the background checks done on the parents wanting these babies.

It is an amazing thing when we look back on it, and most of us would be somewhat appalled, but for these

babies, it was a chance at a loving home, and it would appear that it worked very well…at least in that era. I don’t know how successful such a thing would be in this day and age. The dangers would very likely outweigh the good, and that is sad, because adoption is so expensive that many families remain childless. They just don’t have the money to go through a reputable agency, and anything else is a scary proposition. I would worry about they kinds of people who would try for something like this these days too. Most would be fine I’m sure, but there are a lot of crazy people out there too. I think the 1912 Paris Baby Lottery was an event of another era that will most likely never be seen again.