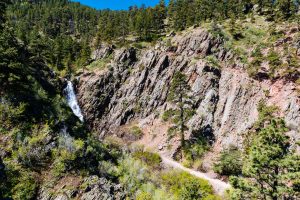 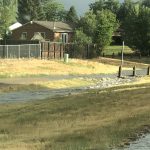 Those of us who live in Casper, Wyoming know about Garden Creek and Garden Creek Falls. It is a beautiful area, filled with trees and picnic tables. Hiking trails take off from the area, some of which follow the creek. Rotary Park is often full of picnickers and hikers. Everyone is out to have a great time. The Garden Creek area was a much different place in 1891, however. What we know as a day picnic area was a resort area and was lined with camps. A hotel was located at the head of Garden Creek and was a loved summer resort, frequented by local picnic parties. It was frequented by families from near and far.

On, July 31, 1891, a cloudburst occurred over Casper Mountain, right about the area of the head of Garden Creek. The creek is about seven miles long from mouth to source, and it was lined with camps. The heavy rains triggered a flash flood. The swollen creek rushed down the mountainside. The first thing the flood waters reached was the resort at the head of Garden Creek. The buildings were crushed and swept away, and the original site of the hotel was buried beneath wreckage twenty or more feet deep. The rushing floodwaters followed the creek on down the mountain, sweeping away anything in its path. Water marks indicate a volume of water 40 feet high and 495 feet wide must have passed through a narrow area about 2 miles form the mountain proper.

As the water rushed down the side of the mountain, it crashed down upon many campers up and down the creek. Many were either sleeping or just about ready to go to bed for the night. Campers, the Newby family, were sleeping when they suddenly found themselves surrounded by water. Newby heard his wife scream for help, grabbed for her, but missed, and in the next second he found himself being carried off by the rushing water. He never saw his wife or baby son alive again. Newby caught the limbs of a floating tree, He was carried about 200 yards, before he was thrown onto a bank. The body of Mrs Newby was found the next morning beneath a pile of rubble, but the Newby’s baby boy was never found. Near the Newby camp was the camp of Samuel Harrison of Alliance, Nebraska. Harrison’s two children were caught in the flood, and carried away. The bodies of the children were recovered the next morning. The tents and wagons of all the campers up and down the creek were destroyed, and at least fifty persons escaped with nothing but their pajamas. The citizens of Casper quickly stepped forward to bring food, clothing, and comfort to the survivors. 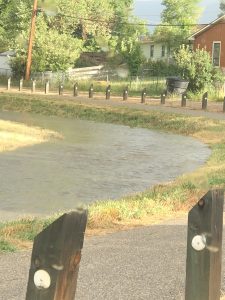 The quick response of the citizens of Casper doesn’t surprise me, because this is a city that often steps up in the face of tragedy. The flooded creek doesn’t surprise me either, because I have seen first hand just how quickly a rain storm on Casper mountain can result in a flood…even in the city proper. All that water has to go somewhere, and Sage Creek near my house is often the recipient of a large portion of that water. Thankfully it quickly drains into the Platte River, and the area returns to normal. Our mostly dry climate helps too, I suppose. The thirsty ground absorbs the water quickly. Still, it shocks me…not that Garden Creek flooded, but more, the vast difference in that area between 1891 and 2019.

One Response to Cloudburst