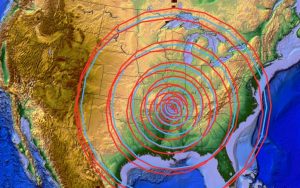 After an earthquake, especially a big quake, you start looking for damage or reports of damage. You will invariably find damage, unless the quake occurred in an area that is completely unsettled or in the ocean. Still, you have to look well beyond the epicenter of the quake…sometimes as far away as 6,000 miles. A big quake can shake things up for many miles. On December 16, 1811 a series of Intraplate earthquakes began, that shook apart the area of the New Madrid fault in present day Missouri, around the Mississippi River. Intraplate earthquakes are often confused with Interplate earthquakes, but are fundamentally different in origin, occurring within a single plate rather than between two tectonic plates on a plate boundary, like the Interplate earthquake does. The specifics of the mechanics by which they occur, as well as the intensity of the stress drop which occurs after the earthquake also differentiate the two types of events. Intraplate earthquakes have, on average, a higher stress drop than that of an Interplate earthquake and generally higher intensity,meaning they can bring more damage. These Intraplate earthquakes continued until February 7, 1812. The first earthquake on December 16th had its epicenter in northeast Arkansas and measured up to an 8 on the Mercalli intensity scale. This earthquake was followed by another six hours later, and two more on January 23rd and February 7th, respectively. The third quake caused warping, magma eruptions, fissuring and landslides. While these were unusual events for the area, the were far from the most unusual events related to this series of quakes.

After the February earthquake, it was reported that the Mississippi River began running backwards, and event that lasted for several hours and caused two temporary waterfalls to develop. The upthrusting of land caused the formation of Reelfoot Lake 15 miles south of the epicenter while the crushing of quartz crystals underground created flashing lights that lit up the sky. Boatmen on flatboats actually survived this experience and lived to tell the tale. Incredibly, the earthquakes could be felt over 50,000 square miles. That is shocking when you think about the fact that the 1906 San Francisco earthquake, which was deadly enough in its own right, was felt over 6,000 square miles.

The New Madrid earthquakes were the biggest earthquakes in American history. While they occurred in the 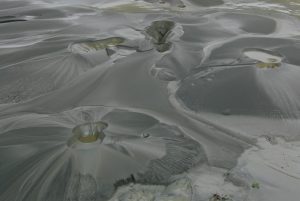 central Mississippi Valley, they were felt as far away as New York City, Boston, Montreal, and Washington D.C. President James Madison and his wife Dolly even felt them in the White House, and church bells rang in Boston. From December 16, 1811 through March of 1812 there were over 2,000 smaller earthquakes in the central Midwest, and between 6,000-10,000 earthquakes in the Bootheel of Missouri where New Madrid is located near the junction of the Ohio and Mississippi Rivers. In the known history of the world, no other earthquakes have lasted so long or produced so much evidence of damage as the New Madrid earthquakes. Three of the earthquakes are on the list of America’s top earthquakes: the first one on December 16, 1811, a magnitude of 8.1 on the Richter scale; the second on January 23, 1812, at 7.8; and the third on February 7, 1812, at as much as 8.8 magnitude.

In addition to the Mississippi River running backwards, there were numerous other strange happenings too. As the area experienced more than 2,000 earthquakes in five months, people learned that most of the crevices opening up during an earthquake ran from north to south, so when the earth began moving, they would chop down trees in an east-west direction and hold on using the tree as a bridge. Unfortunately, there were also “missing people” who were most likely swallowed up by the earth. Some earthquake fissures were as long as five miles. Another strange event, though not totally unusual was the sand boils that formed. A sand boil is sand and water that come out onto the ground surface during an earthquake as a result of liquefaction at shallow depth. The world’s largest sand boil was created by the New Madrid earthquake. It is 1.4 miles long and 136 acres in extent, located in the Bootheel of Missouri, about eight miles west of Hayti, Missouri. Locals call it “The Beach.” Other, much smaller, sand boils were also found throughout the area. Small pellets up to golf ball sized tar balls were found in sand boils and fissures. Known as Seismic Tar Balls, they are petroleum that has been solidified, or “petroliferous nodules.” Lights flashed from the ground, caused by quartz crystals being squeezed. Generally known as Earthquake Lights, the phenomena is scientifically called “seismoluminescence.” 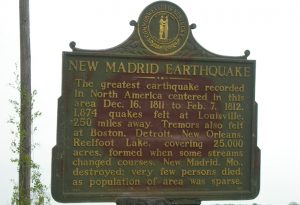 dust particles caused by the eruption of warm water into cold air. Sounds of distant thunder and loud explosions accompanied the earthquakes. People reported strange behavior by animals before the earthquakes. They were nervous and excited. Domestic animals became wild, and wild animals became tame. Snakes came out of the ground from hibernation. Flocks of ducks and geese landed near people. I’m sure that some of these events could be viewed as normal during n earthquake, but certainly some of them or even the mere numbers of these phenomena could be viewed as very strange, and I don’t know that there has ever been a more strange earthquake before or since.

One Response to Strange Happenings