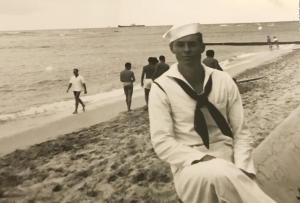 When someone is killed in a war, we are always in the hope that they will be found quickly, and identified by their friends, so that their remains can be returned to their family for a proper burial. Unfortunately, that is not always the case. Nevertheless, we hope that the time passing between death and identification is a very short amount. Unfortunately that was not the case with Carl David Dorr, who was one of the 429 sailors and Marines killed on board the USS Oklahoma when it was sunk in the Japanese attack on Pearl Harbor. Only 35 people on the ship were positively identified and buried in the years immediately following the December 7, 1941, military strike, according to the Defense Department. The unidentified remains were buried as unknowns at the National Memorial Cemetery of the Pacific, which fills the Punchbowl crater in Honolulu. For 77 years, Dorr’s family has been waiting and wondering what became of him. They knew he was at Pearl Harbor, and that he

was on the USS Oklahoma. The bodies were there, but they could not be identified. I can’t think of anything that would be more frustrating than that. Sadly, the wait was beyond long…it was 77 years. When I think about his family, first losing their 27 year old son, and then not being able to bury their son. They died without that closure.

Carl’s family, like most American families, gathered around the radio on December 7, 1941. The news was grim. They didn’t know much yet, but they knew Carl’s ship had been attacked. With sinking hearts, they tied to hold out hope that by some miracle, he had survived. Then, they received the crushing news that he was missing in action…then, presumed dead. After the Defense Department began DNA collection in 2009, his family provided samples in hopes that one day it would help identify Carl’s body, his nephew said. His mother kept an heirloom photograph in her living room “so she could keep an eye on him,” Thomas Dorr said. She was 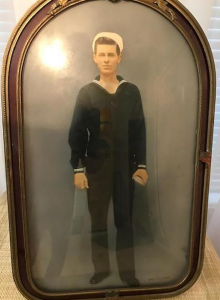 able to see her son every day, even if he never made it home at all. And, of course, he never did, at least during their lifetime.

Recently, the DNA provided for identification purposed, finally paid off. Dorr’s body was finally identified, and he was going home at last. About 15 of Dorr’s relatives walked onto the tarmac of South Carolina’s Greenville-Spartanburg International Airport. As they watched, a flag-draped coffin was lowered from the plane into a hearse. “There was nothing but dead silence,” Carl’s 70-year-old nephew, Thomas Dorr, who lives in St. Johns, Florida, told CNN. “I knew that what I was experiencing was history.” Carl David Dorr was finally going to be laid to rest, and how fitting that his funeral would be held on the same day that he died, December 7, but 77 years after the day he died…Pearl Harbor Day.

One Response to Finally Home