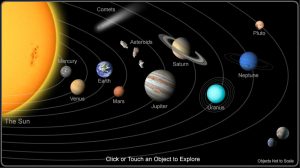 For centuries, I think most people thought Earth was alone in the universe, at least when it came to planets. It was inevitable that people would decide that they wanted to know more about the numerous stars, the moon, and the sun. Once the telescope was invented, with the earliest workings towards the design of the refracting telescope being made by German-Dutch lensmaker Hans Lippershey in 1608, people, or at least a few people, were able to see the things that really existed beyond Earth’s atmosphere. I can only imagine the shock as the first viewing proclaimed, quite loudly, that we were not alone in the universe…not even in the realm of planets, not to mention galaxies.

Thinking about the vastness of the universe has a tendency to make you feel very small, and I don’t suppose many people in the 1600s were very comfortable with that. These days the thought of the other planets in our galaxy doesn’t really bother us, and in fact it seems completely normal to us. As my husband, Bob and I have been going on our nightly walks, I have been watching the movement of several planets…namely Mars, Jupiter, and Saturn. Just the thought of these huge, star-like celestial bodies, at least to the naked eye, makes me think about how amazing God’s creation is. I have been able to picture in my mind, how these planets look in the universe, and now, the idea that they are stars seems absurd. Of course, my own “revelation” of that fact came centuries after the great men of science figured that fact out, and of course, that “revelation”didn’t creep into my mind today, but was rather taught to me over the years of my schooling. Still, sometimes while you know something is a fact, the enormity of it takes much longer to fully register in your head. That is the way i feel about it,after a fashion anyway…as if suddenly, I can almost see the planets with the naked eye.

It makes me wonder how the various scientists, who discovered each of the planets in our galaxy, felt the first time the telescope found a planet, especially a new one…or shall I say, one that was never discovered before that moment. With that thought running around in my head, I learned that on September 23, 1846, German astronomer Johann Gottfried Galle discovers the planet Neptune at the Berlin Observatory. We all now know Neptune as the eight planet in our solar system, and because it was the eighth, it was further out in space than 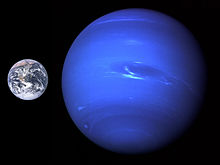 the seven that were discovered before it. I can only imagine the excitement he felt in that moment. He was looking upon something no other human being had seen before. I don’t know if he had any concept of how big the planet was in comparison to Earth, but we now know that Neptune is the eighth and farthest known planet from the Sun in the Solar System, because Pluto was later found and then after years as a planet, discounted as a planet and named a dwarf planet. In the Solar System Neptune is the fourth-largest planet by diameter, the third-most-massive planet, and the densest giant planet. Neptune is 17 times the mass of Earth. At that size, I would say that Neptune’s discovery was by no means a small thing.