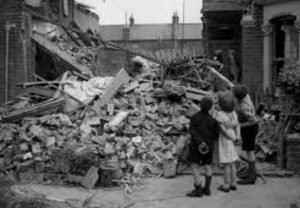 The Blitz was a German bombing offensive against Britain in 1940 and 1941, during World War II. The term was first used by the British press and is the German word for lightning. When the Germans bombed London in the Blitz bombing, the nerves of the people were very much on edge. They spent most of their nights in hiding in the subway tunnels. When they emerged, they had no idea what to expect. Most of them knew that their beloved city would be very different than it was before, and they knew that, in reality, it may never be the same. Yes, it could be rebuilt, but it would never…never be the same. The adults felt sick a they looked at the city they loved, but the 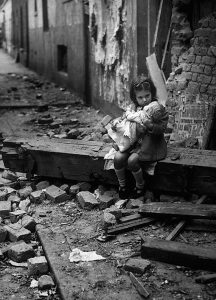 adults were not the only people who were looking at the devastation.

Some of the saddest pictures taken after the Blitz bombings, were those taken of the children. I can’t imagine what must have been going through their minds as they looked at the devastation that was once their home. They had spent so many wonderful hours playing in their bedrooms, and now they had no bedrooms, or even a house for that matter. Their home had been reduced to a pile of rubble. Sitting there looking at what little is left, some children find a little bit of solace in the fact that a doll or something similar managed to survive the carnage…and they feel somehow blessed. And, of course, they are blessed, because for so many others, there is nothing left.

I’m sure that those little ones looked to their parents, hoping to see a spark of hope, or a little bit of encouragement, but all they saw was a look of shock and disbelief on the 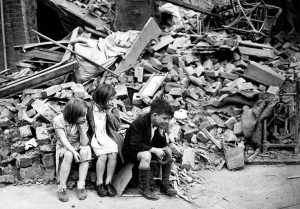 faces of their parents. That only served to create a deeper sense of concern in the children. What was going to happen to them now? Where would they live? And the really sad thing was that their parents are wondering the same things. These are the faces of war. We often think of the soldiers, usually facing off with the enemy. Yes, sometimes we think of the civilians, but most of us almost try not to think of them, because we can imagine what they are going through. The news photographers, however, have to see the civilians. They have to photograph the destruction. It is their job, but when we see those stories, with their necessary pictures, we really see how war affects the civilians, especially the children. And we are horrified.