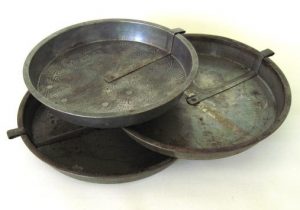 Every New Year’s Eve for as long as I can remember, our family threw a party, both for the New Year and for my mom’s birthday, which is January 1. It is our New Year’s Eve Tradition. As I was thinking about our tradition, I wondered about other New Year’s Eve Traditions. So, I decided to research some of them. Wow!! There are some really strange traditions out there. One I found particularly strange was that in Switzerland, they drop a dollop of ice cream on the floor. It is supposed to bring overflowing abundance in the New Year. Now, I don’t know about you, but I think that is strange…and messy. In Spain, it is all about good timing. When the clock strikes midnight, Spaniards try to eat a grape in time with each chime. Those who don’t manage to cram the right number of grapes at the right time face the threat of bad luck for the following year. Be warned, it’s not as easy as it sounds, apparently. Many people practice beforehand to increase their chances of beating the clock. This is serious business from what I read. In Czechoslovakia, they like to look to their future around New Year’s, usually with the help of an apple. The fruit is cut in half and the shape of the core determines the person’s fate. If it’s a cross, mischief is on the way, but if it’s a star, you can expect happiness. Apparently, many New Year’s Eve traditions center around food…including our party, but our party doesn’t have any traditions that involve the food.

Several of the traditions sounded very familiar to me, because they are traditions I have grown up with. Many places celebrate with fireworks on New Year’s Eve. In some places, it is believed that the noise and light from fireworks and sparklers would scare away bad spirits, not something I believe in, but some people might. At our house, midnight means that it’s time to “beat the pans.” It’s something we have done since I was a little girl, and a tradition that my sisters and I would not change. It reminds us of our parents, and makes it seem like they are there with us on that special night each year. I do think that my parents might be surprised to find out that their tradition, that they made up, is one that is also tradition in Iran…I was very surprised.

A couple of traditions were, strange to me. People in Buenos Aires, Argentina, have an unusual tradition. On the last day of the year they shred old documents and papers to symbolize leaving the past behind. Around noon, on New Year’s Day, people throw the scraps of paper from their windows all over the city in a shower of confetti. Out with the old and in with the new, I guess. I hope they never need those documents. As strange as that tradition was, the winner of the strangest tradition on Earth…in my mind at least it the one celebrated in Peru. The last day of December…New Year’s Eve, is the day of the Takanakuy Festival. The Takanakuy Festival is the craziest festival I have ever heard of. The Takanakuy Festival, is the fighting festival. Every year people 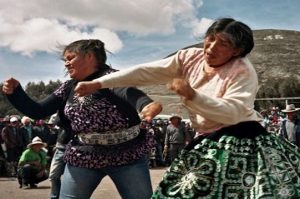 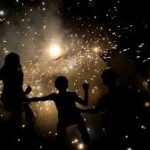 of Peru have a fist fight to settle their differences. Can you imagine a whole town fighting in the street? They then start the year off on a clean slate on New Year’s Day. I guess then that it must be illegal (or at least, in very bad taste) to be mad about anything or at anyone that you had a fist fight with the day before. Now, I think that the tradition of not carrying any arguments into the new year is a really good one, but I know that I would not want to have to go through that whole fist fight part of the festival. Nope…I sure wouldn’t.