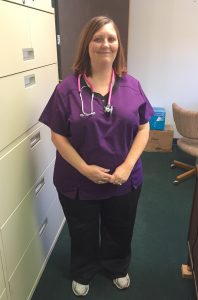 Sometimes, changes occur when we least expect them. That is was happened with my daughter, Corrie Petersen, who found herself in a job that really held no future for her, even after she gave them almost 24 years of her life. Everyone wants to know that they are going to have a chance be promoted and move up in the company, but that was not to be the case, so after listening to the wisdom of God, Corrie made a bold move and went back to school. Corrie has been a caregiver, along with the rest of our family since 2005 when her grandpa, my dad, Allen Spencer got sick. Over the following ten years she was very active in the caregiving process, first with my dad, then my mom, and then her Schulenberg grandparents, and now she cares for her husband, Kevin. I don’t know how we could have managed with out Corrie and others in the family who, just like her, stepped up to pitch in, when we found out that caregiving takes a village.

When it came to Corrie that if she wanted to move up in a job, she needed a change,

she naturally chose nursing, and began a journey that would bring about many changes and take her to levels of confidence she didn’t know she possessed. She went back to school, after 23 years, and conquered not only the classes, but her own uneasiness about taking them. I am happy to report that she is having great success in her studies. Corrie also took the CNA class at Shepherd of the Valley Care Center, knowing that when she started nursing school, she would no longer be able to keep the job she had, because the nursing program is held during the day. She passed the CNA program with flying colors and applied for a job at Elkhorn Valley Rehabilitation Hospital. She was hired right away, and today begins her new career as a CNA, or according to them, Patient Care Technician…temporarily anyway, because Corrie’s journey doesn’t end there. She has other plans in mind. 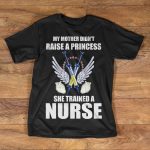 She will have other new beginnings as she continues her journey toward her degree as a Registered Nurse, so this is temporary, but it is nevertheless, very exciting. This is what she has dreamed about since this journey started. She knows the work will be hard, but it is also very rewarding as she also knows, since she has basically been doing this work for twelve years already. I am so excited for my daughter, as she starts this new adventure, and so proud of her for taking the necessary steps to achieve her goals. The future is going to be a bright one for her, and I can’t wait to watch the changes as she decides her future plans in her nursing career. Congratulations Corrie. Have a wonderful first night at work. We are so proud of you!!