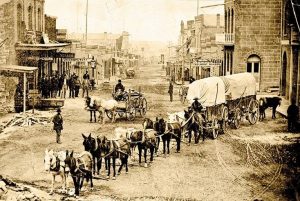 The discovery of gold in the United States triggered massive growth, with towns springing up across the area. Helena, Montana was one of those towns. On October 30, 1864, four miners struck it rich at their appropriately named mine, “Last Chance Gulch.” From that discovery came one of the wealthiest cities in the United States by the late nineteenth century…Helena, Montana. While it was once one of the wealthiest cities, the current population of Helena doesn’t really fall in line with the direction the city appeared to be taking in 1864. As of the 2010 census the population is 28,190, making it the fifth least populous state capital in the U.S after Montpelier, Vermont; Pierre, South Dakota; Augusta, Maine; and Frankfort, Kentucky.

My husband, Bob Schulenberg’s aunt, Marion Kanta, and her family lived in Helena until the time for her passing in 1999, and many of her family members live there still. That said, we visited the capitol city a few times, and found it to be a very nice place. Of course, during the gold rush years, things might have been very 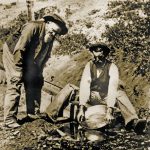 different. A gold rush town can have a tendency to be a high crime area, and when 3.6 billion dollars worth of gold is extracted in the city limits of a town over a twenty year period, you know that there were people who would like nothing more than to take over the claim of another person, no matter what it took. The first major Anglo settlement of Montana began in the summer of 1862, when prospectors found a sizeable deposit of placer gold at Grasshopper Creek to the west of what is today…Helena, Montana. When other even richer deposits were discovered nearby, a major rush began as tens of thousands of miners scoured the territory in search of gold. In 1864, four prospectors spotted signs of gold in the Helena area while on their way to the Kootenai country, but they were eager to reach the reportedly rich gold regions farther to the north and did not stop. Then, after striking out on the Kootenai, they decided to take “one last chance” on finding gold and returned. When the signs turned out to mark a rich deposit of placer gold, they staked their claims and named the new mining district Last Chance Gulch.

Last Chance Gulch would prove to be the second biggest placer gold deposit in Montana, producing some 19 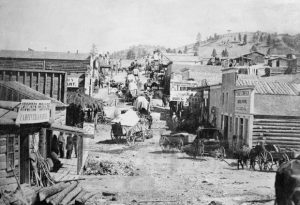 million dollars worth of gold in just four years. Almost overnight, thousands of miners flooded into the region, and the four original miners added to their fortunes by establishing the town of Helena to provide the new miners with food, lodging, and supplies. But unlike many of the early Montana mining towns, Helena did not disappear once the gold gave out, which was inevitable. Helena was able to survive and grow by serving the wider Montana mining industry, because it was located on several major transportation routes, well supplied with agricultural products from an adjacent valley, and near to several other important mining towns. In 1875, the city became the capital of Montana Territory, and in 1894, the capital of the new state of Montana.