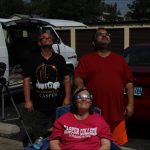 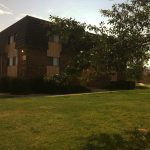 Today’s solar eclipse will not be the first one I have ever seen, but it will be the first total solar eclipse I have ever seen. I most clearly recall the July 10, 1972 eclipse. It was a warm sunny day, and downtown Casper, Wyoming had set up a viewing telescope for those who wanted to have a look. Casper was not in the path of totality, so crowds were not an issue like they are this time. I find myself somewhat stunned that Casper is one of the best sites to view today’s eclipse. Casper isn’t usually a big tourist attraction, but today, we have found ourselves at the center of all the hoopla.

I’ve watched a movie about viewing a total eclipse, and people come away feeling…somehow changed after viewing one. My mind can’t seem to wrap itself around how that could happen, but I guess I’ll see how I feel afterward. For me, I think that if I feel a change it will be more because I think that the signs of the sky were placed there by God, to speak to His people. Many people may think that’s crazy, but it’s no more strange than to think that it’s accidental. The whole universe was created by God, so why wouldn’t He plan it’s every move. 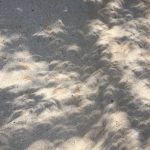 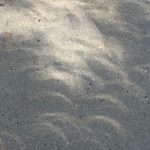 So, the eclipse is over now, and I must say that the moments in totality were…amazing. The color of the atmosphere around us was not like the typical, dusk that everyone said to expect. It was different than that somehow. My son-in-law, Kevin Petersen thought so too. While we were waiting for totality, I tried to look at the things everyone said to watch for, and probably the most surprising to me was the eclipse shadows. I don’t know what I thought it would look like, but when I saw it, I startled my daughter, Corrie Petersen; my son-in-law, Kevin; and my husband, Bob Schulenberg. I shouted, “Look!! It’s the eclipse shadows!!” They are actually called Solar Eclipse Crescent Shadows. Well, my family thought I saw a snake or something, hahaha!! We also noticed, as expected, that the birds started their evening song ritual, preparing to go to sleep for the night. We might have heard crickets, but the people around us set off fireworks at that time, so we couldn’t hear that. We saw the sunset along the horizon, and afterward we had to laugh, because we all forgot to look for the stars. I caught a very faint glimpse of them in a picture I took. 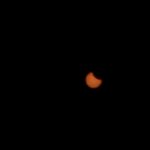 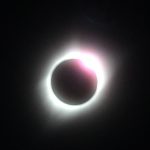 Totality was an amazing experience, but I like most people think that 2 minutes and 26 seconds is a very short time. You simply don’t have time to see everything that there was to see. The cool air was, in reality, a welcome change from the heat we had been sitting in, but like the rest of the eclipse, it didn’t last very long. With the return of the sun, came the warmth of the sun again. Totality was over, and yes, maybe I was changed. I had experienced a total eclipse, and it was amazing. It was something I will never forget.