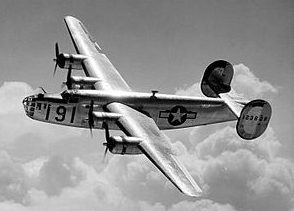 Airplane disasters are always horrible, but sometimes the circumstances just don’t seem to fit the disaster. During World War II, the US Army Air Forces were stationed in bases around the world, mostly for quick access to air targets, but with the added benefit for the people in the area of some protection from enemy forces. Just having the planes in the area tended to be a deterrent for the enemy planes, who did not want to be attacked in great numbers. Planes like the B-17, B-24, and others regularly flew over the towns near their bases. One such flight…unfortunately ended in a disaster.

On August 23, 1944, a pair of newly refurbished B-24 Liberator heavy bombers were being taken on a test flight, prior to their delivery to the 2nd Combat Division. The planes departed US Army Air Force Base Air Depot 2 and Warton Aerodrome at 10:30am. Due to an impending potentially violent storm, both planes were recalled. Unfortunately, by the time they returned, to the vicinity of the Aerodrome, the wind and rain had significantly reduced visibility. Newspaper reports detailed wind velocities approaching 60 mph, water spouts in the Ribble Estuary and flash flooding in Southport and Blackpool. As the two planes flew in formation from the west toward runway 08, the pilot of the B-24H-20-CF Liberator, US aircraft serial number 42-50291, named “Classy Chassis II”, 1st Lieutenant John Bloemendal, reported to the control tower that he was aborting landing at the last moment and would “go around.”

Shortly afterwards, and out of visibility of the second aircraft, the aircraft hit the village of Freckleton, just east of the airfield. As it came down, the B-24 Liberator heavy bomber crashed into the center of the village of Freckleton, Lancashire, England. The aircraft crashed into the Holy Trinity Church of England School, demolishing three houses and the Sad Sack Snack Bar. The death toll was 61, including 38 children.

The plane was already flying very low, and for whatever reason, the wings were very nearly vertical. The plane’s right wing tip hit a tree top, and was ripped away as it impacted the corner of a building. The rest of the wing continued, plowing along the ground and through a hedge. The fuselage of the 25 ton bomber continued, partly demolishing three houses and the Sad Sack Snack Bar, before crossing Lytham Road and bursting into flames. A part of the aircraft hit the infants’ wing of Freckleton Holy Trinity School. Fuel from the ruptured tanks ignited and produced a sea of flames. In the school, 38 schoolchildren and six adults were killed. The clock in one classroom stopped at 10:47 am. In the Sad Sack Snack Bar, which catered specifically to American servicemen from the air-base, 14 were killed…seven Americans, four Royal Air Force airmen and three civilians. The three crew members on the B-24 were also killed.

The official report stated that the exact cause of the crash was unknown, but concluded that the pilot had not fully realized the danger the storm posed until underway in his final approach, by which time he had insufficient altitude and speed to maneuver given the probable strength of wind and downdrafts that must have prevailed. Structural failure of the aircraft in the extreme conditions was not ruled out, although the complete destruction of the B-24 prevented any meaningful investigation. Because many of the pilots coming to the England commonly believed that British storms were little more than showers, it was recommended that all US trained pilots should be emphatically warned of the dangers of British thunderstorms. A memorial garden and 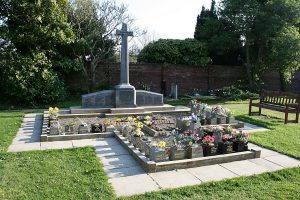 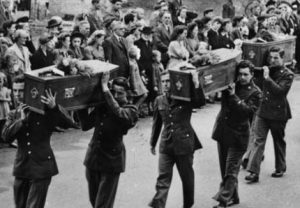 children’s playground were opened in August 1945, in memory of those lost, the money for the playground equipment having been raised by American airmen at the Warton airbase. A fund for a memorial hall was started, and the hall was finally opened in September 1977. Another memorial in the village churchyard was placed at the accident site in 2007. The plane that had come to signify protection for the area people, in the end spelled friendly disaster.