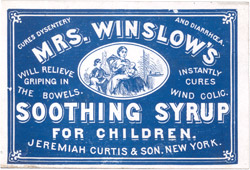 For as long as babies have been getting teeth, parents have been dealing with cranky babies. People have tried everything from a cold washcloth to alcohol. These days, there are other safe products that can be used, such as baby Tylenol, Motrin, or Ibuprofen, not to mention things like Numbs It. In years gone by, however, things were different. There were no real controls on medicines like there is today, and they didn’t know what ingredients could be harmful, or what might interact with other ingredients to cause serious problems.

Inventors, and sometimes even housewives, came up with remedies that worked to ease the pain, and assumed that they had found the solution. Little did they know what problems they were causing down the road. Remedies like Doctor John’s Elixir, or some other such name, made by people with no training as a doctor, nurse, or even a pharmacist, and no control to

make sure they are safe. These formulas were often called “patent medicines” because they were over the counter medicines that were not patented, but were trademarked. One of the most famous was Mrs Winslow’s Soothing Syrup. In 1845, druggists Jeremiah Curtis and Benjamin A. Perkins, of Bangor, Maine, partnered to manufacture this remedy. It was said that Mrs Charlotte N Winslow, Curtis’ mother-in-law, created the formula while she was a nurse caring for infants. According to the label, the syrup could take away “teething pain, regulate the bowels, and was the best known remedy for dysentery and diarrhoea, whether arising from teething or other causes.”

It all sounds wonderful…the perfect solution to all the baby’s ills, right? Wrong!! The two main ingredients were morphine and alcohol. Yes, it got rid of the pain, and pain medications cause constipation, so that took care of the other issues, but morphine is addictive at best, and deadly at worst, especially if the patient is given too much…which was a distinct possibility, given the fact that no one knew that morphine was addictive or deadly. Then add to it, alcohol…which shouldn’t be mixed with morphine, and you have a seriously dangerous drug. It’s not known exactly how many children became addicts and how many died, but it was used everywhere until it was denounced as dangerous in 1911 and even then, they still sold it until about 1930. Of course, medicines of today can be found to be dangerous, but much of the time, the medicines are tested for quite a while before they are released, and then most by prescription only…at least at first.