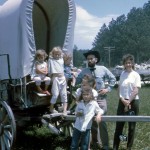 The date was July 18, 1953, in Casper, Wyoming…not a particularly special day in the grand scheme of things, but in my family, it was the most important day of all, because without the events of that day we would not be a family. That was the day that two very important people got married…my parents. Mom and Dad had known each other for quite some time, because Dad was a family friend. Mom was too young to be his girlfriend when they first met, but that doesn’t mean that she was too young to have a school girl crush…and boy, did she. She thought that Allen Spencer was the most handsome man she had ever seen…and that was when she was a young girl. Her view of Dad never changed, and from the dad standpoint, his daughters all felt the same way…he was the best. Dad’s view of Mom never changed either. Collene Byer Spencer was his princess…his Doll, and he treated her accordingly, and the daughter who didn’t had better be prepared to get into big trouble from Dad. They were the greatest parents on earth.

Mom and Dad loved to travel, and as kids, we got to travel to a large number of the states, as well as Canada, and for my younger sisters, Mexico. I remember some of our camping trips. Mom and Dad were a team when it came to getting their five girls ready for the day. I often wondered, in later years, why they took so long to get out of the campground in the mornings, but after all those years of slow little girls, and later primping teenaged girls, they were just used to taking things slow. They were on vacation after all, so what was the rush. It wasn’t like the “Vacation” movies where you were on some kind of a serious schedule. They lollygagged when they felt like it, and we still saw everything we wanted to see. We may not have jumped out of bed and rushed around the camp, working to get out of there, but one thing I can say is that we thoroughly enjoyed each and every campsite…well most of them anyway. And when the vacation was over, we felt rested.

The years of my parents’ lives flew by far to quickly in my opinion, much like my own life. There are so many 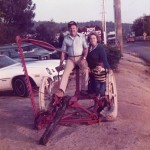 times I wish I could go back and re-live some of the past…not to change anything…but rather to savor the moments once again. We seldom think to savor those sweet times when we are living them, because it doesn’t seem necessary then. I have been privileged to lead a blessed life, with a wonderful family, and those memories that I have carefully tucked away in my memory files will always be the most special memories on earth. Today would have been my parents’ 63rd anniversary. It’s their 2nd together in Heaven. Happy Anniversary Mom and Dad. We love and miss you very much.