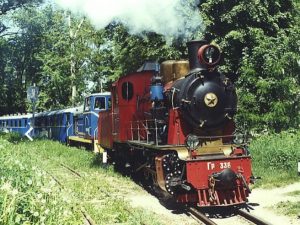 If I tell you that there exists in this world, a children’s railway, would you think of the Orphan Train, bringing children out West for adoption into families there? Or would you think of some kind of forced child labor on the railways? Either way…you would be wrong. The Children’s Railway was started in Soviet Russia in 1932. The concept is a unique one. The idea was to teach teenaged children to build and run a railroad as a way of learning the railroad trade. It was an extracurricular activity that was voluntary. Things like that aren’t offered in this country…at least not that I’m aware of. Nevertheless, I think my grandfather, Allen Luther Spencer might have enjoyed that, had it been offered in his time. I also think that my cousin by marriage, James Forseen, might have loved that since he has always loved trains, and managed to land a job with the railroad. He loved them so much that he had to have one in the wedding photos when he 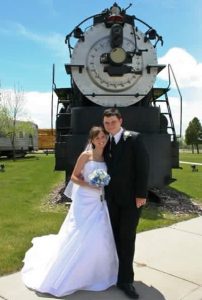 married my cousin Dani Byer Forseen. Just imagine James, if you could have worked on a railroad in high school!!

As I said, the children’s railway was a phenomenon that originated in the USSR. The first Children’s Railway opened in Gorky Park in Moscow, on July 24, 1932. It was a greatly developed activity in Soviet times. By the time the USSR broke up, there were 52 children’s railways in existence in that country. Many children’s railways are still functioning in post-Soviet states and in Eastern Europe, so obviously this is an activity that has taken off…and imagine the kids who would stay out of trouble if they fell in love with railroad work. I can envision the kids having such a great time running the railroad that they would never have the time or the inclination to get into trouble or into gangs. Their imagination would be too busy. 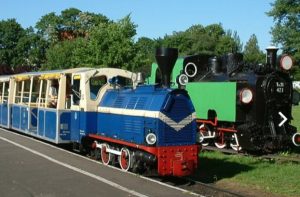 main lines and they can be seen as heritage railways. Even though a few exceptions exist, most of the children’s railways that were built in the communist block have a track gauge of at least 600 mm (1 feet 11 5/8 inches) and can carry full size narrow gauge rolling stock. Of course, for the sake of safety and training purposes, the children’s railways are all run under the supervision of adult railroad workers, but what better way for things to be done. The children’s railways in existence these days are mostly for the purpose of tourism, but I suppose that if necessary, they could be used for other reasons. Whatever their purpose is today, I think the Children’s Railways sound like a very cool idea.