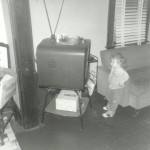 Television was invented by a 21 year old man named Philo Taylor Farnsworth, and first successfully demonstrated in San Francisco on Sept. 7, 1927. It’s odd to think that my dad, Allen Spencer lived both before the invention of television and after it. I suppose that isn’t so very odd, because I have lived before and after the cell phone, and that doesn’t seem strange to me at all, so I suppose it didn’t seem strange to my dad either. Then, on March 25, 1954…just a month and a half before my sister, Cheryl Masterson was born, RCA announced that it had begun producing the first color television sets in its Bloomington, Indiana plant.

I’m sure it was a while before most homes made the move to color televisions, and 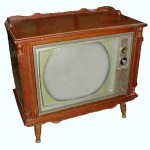 then, of course, there was the wait for shows to be filmed in color. I know that I remember watching a black and white television, and I’m sure most people my age can say the same. The current generation would have no idea what it was like to watch a black and white television, or an early color television. They have seen everything from HD television, to cell phones with television, as well as tablets. The old televisions would seem completely antiquated…and in reality, my generation would look at them that way too. It amazes me just how quickly we get used to new technology, and it amazes me just how long people will hold on to the old stuff before making the transition too. I suppose some think that if it isn’t broken, there is no reason to replace it just yet, but others simply wait until the see how well this new fangled gadget is going to work, or if it’s around very long. So many fads come and go, and are never 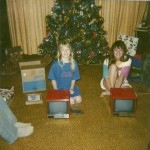 heard from again. Others, like televisions, cell phones, and computers are here to stay.

Television sets have gone from average size to ultra big, to ultra small, and everything in between. Of course, as we all know, the television has continues to improve in color and clarity too. Sometimes I think the color is almost better than real life…if that’s possible. With new abilities in editing, color can be enhanced to amazing levels. I’m sure that there are some people who would think enhanced color is not a good thing, and sometimes…if it seems completely outlandish, I would have to agree, but when it comes to watching television, I think they do a pretty good job, and I can’t imagine going back to a black and white television.