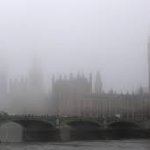 When we think of disasters, we seldom think of smog, but on December 4, 1952 in London, England, smog caused a disaster of epic proportions. On that day, a high pressure system stalled over the Thames River Valley, causing the smog to hang over the area for four days. The air over London became trapped, and along with it, the smog. We have lived with smog in our world for a long time, and while we know it isn’t good for us, most of us consider it to be a minor annoyance, rather that anything serious. Nevertheless, on this day, December 4, 1952, the people of London, England found out that smog is not something to be taken lightly.

Because of the cold air in the area, many people burned extra coal in their furnaces to keep warm, making the problem worse. The smoke, soot, and sulfur dioxide from the area’s industries along with that of cars and energy use by the people caused heavy smog to blanket the city. By the 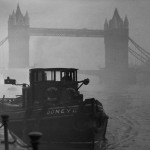 morning of December 5th there was the smog made it difficult to see for hundreds of square miles.

By December 7th, the smog was so thick that it blocked out the sunlight and visibility was reduced to five yards. Transportation in the region was halted when the smog caused several rail accidents, including a collision between two trains on the London Bridge. The biggest problem, however, came from the respiratory distress it caused to both humans and animals, including difficulty breathing and coughing up phlegm. One of the first victims was a prized cow that suffocated on December 5th. Suddenly, people were dying in their sleep over the weekend…thousands in fact. The exact number of victims is not known, but has been estimated between 4,000 and 8,000.

I first heard about this unbelievable situation while watching the weather channel a while back. I knew that the 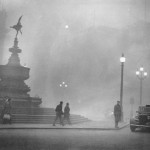 weather in London had been known to cause some problems, but the main one was when heavy fog would blanket the city. That was something that made England a tough area to fly in during World War II, and was also one of the reasons why B-17 Bomber crews were allowed to fly less missions before being released to go home. They figured that if they made it through the fog successfully, they deserved to get to go home. Nevertheless, I would never have expected that smog would cause so much death, but on December 4, 1952, when a freak high pressure system locked down the air over London, England, holding the smog tightly in place, that is exactly what happened. I don’t know if any of my relatives were among the victims or not, but since my family does come from England, I would not be surprised.