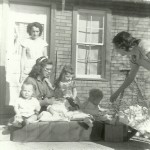 When my Uncle Larry Byer, married the love of his life, Jeanette Morton, she became the first daughter-in-law my grandparents had. They had nine children and of those, just two sons, Larry and Wayne. Larry was the oldest boy, Wayne the youngest boy, with three girls before Larry, and three girls after Wayne, and my mom, Collene Byer Spencer in the middle.

My grandparents were used to girls, with all of their mixed emotions, but prior to Aunt Jeanette, the additions had always been men…husbands for the daughters. I’m not sure, but I have to think that it must have been a little bit of a culture shock to add another girl to this mix. When your family has an over abundance of girls, adding boys seems to calm the whole world down some, because suddenly the emotions of those girls settle down too. I

suppose they probably thought that adding a daughter-in-law could possible bring a new surge of emotions, but they couldn’t have been more wrong. Aunt Jeanette has always seemed like a very calm, mellow person to me…with a wonderful laugh that brings a smile to everyone’s face. Of course, I don’t remember a time when I didn’t have an Aunt Jeanette, because she married my Uncle Larry back on February 11, 1956, and I wasn’t born until the following April. 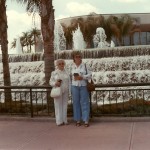 sweetness to the family all her own. She is one of the few people these days who always sends out Christmas cards, because she wants those she loves to know that she is thinking about them. That is just the kind of person she is and always has been.

Aunt Jeanette has long been the only sister-in-law in the family, but in reality, she is more like a sister than a sister-in-law to the rest of the siblings. She has endeared herself to them in many ways. Her kindness and generosity are well known to anyone who ever had a need. She is quick to offer words of comfort, and just to let you know that no matter what you need, she will be there for you. Today is Aunt Jeanette’s 79th birthday. Happy birthday Aunt Jeanette!! Have a great day!! We love you!!

One Response to Only Daughter-In-Law