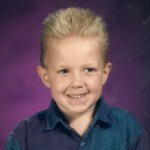 The moonless night was dark, quiet, and peaceful. The children were tucked in their beds in the trailer, while their parents, my sister, Alena Stevens and her husband, Mike sat outside by the campfire. It had been a beautiful day on vacation. They love camping, and this was the perfect ending to a perfect day. After sitting by the campfire for a while, they decided that it was time to go to bed. They tip toed into the trailer, where the candle in the sink that Alena had left burning for a night light for the kids had burned itself out, leaving the trailer very dark. They climbed into bed, and started to drift off to sleep. Suddenly the quiet was shattered as their ten year old son, Garrett sat up and yelled, “I’m blind!!” To which my sister said, “No you’re not. It’s just dark. Go back to sleep.” I’m sure it was all she could do to hold back the giggles that were bubbling up inside her. I know it would be hard for me.

This was not the first time Garrett would do some goofy thing, nor would it be the last. When Garrett was about three or four, he decided that he wanted to ride a big boy bicycle, so his parents got him a two wheeler and put training wheels on it. Garrett was floating on air. He loved riding around on the bike. That didn’t mean, 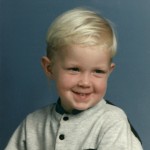 Not all of Garrett’s antics were on his own, of course. His sisters, Michelle and Lacey got in on some of them too. I’m sure you think you know what to do with a sleeping bag, but you would be wrong. A sleeping bag isn’t just for sleeping. No, it makes a perfect sled too. The three kids used to get on the sleeping bags and slide down the stairs in the classic style of the Home Alone movies. The biggest problem was that unlike the Home Alone movie, where McCauley Calkin used the sled and went right out the front door, their stairs ended with a wall a very short distance away. Nevertheless, the fun continued until one of the kids hit the wall a little too hard and ended up crying. Then Alena had to make them stop.

Those days of being a silly little boy are long gone now, but Garrett is still a joker in any way he can think up. I guess some things will never change…or will they. These days Garrett is busy making plans of a different kind. He is ready to take the next big step in his life, as he and his fiancée, Kayla Smiley plan their wedding to take place some time next summer. Their marriage, however, will probably not change Garrett’s funny side. While Garrett is the kind of man who is always ready to help whenever he is needed, he also still loves to pull pranks and other jokes on people whenever he can. I’m quite sure that they will never have a dull moment in their lives together. Today is Garrett’s birthday. Happy birthday Garrett!! Have a great day!! We love you!!