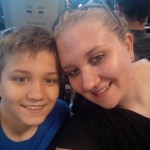 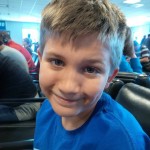 Since my grand nephew, Topher Spicer’s mom, my niece Andrea Beach has been a single mom for most of his life, he has given himself the job of being the man of the house. He is very protective of his mom. He doesn’t like it when she gets hurt and is the first one there to take care of her when she doesn’t feel well. He is more than a son to her, he is her best buddy!!

Topher is a kid who loves family. While he is his momma’s boy, he very much loves his dad and half-sister too. He loves spending time with them in Utah, but misses and worries about his mom, while he is away from her. He really is such a sweetheart, with a big heart of gold. He is also very close to his grandparents, my sister Caryl and her husband, Mike Reed. He enjoys coming to Casper with them when they come down to work on their ranch, and that lets the rest of the family see him once in a while too, since he lives in Rawlins. And as for Caryl and Mike…well, they tell me that Topher is a joy to take care of.

Topher is an independent young man, who has a great imagination, and is very creative. He is really into Pokémon…are they seriously still around…and Jurassic World…I can’t believe they are back, but I guess you have to be a ten year old boy to really understand the things they are into. He likes to swim and ride his bicycle, and he also loves to play Yahtzee and work puzzles…something I personally don’t have the patience for. But Topher is a kid who has the ability to focus, and he is ok with sitting still, when he is working on something. That fact was made clear to me when he came down the last time for a visit. As we were working on going through our parents’ things, Topher sat quietly and played on an iPad. The thing I found so interesting was that my mom’s cat, Lewie wanted to sit right next to Topher. I suppose that doesn’t seem strange to most people, but Lewie usually hides from all kids, so for him to choose to sit next to Topher was…well, amazing.

Topher is coming into his own in many areas, but one of the most important is his relationship with God. His mother, Andrea has taught him to love the Lord, and to have a close walk with Him. And Topher has made that relationship his own. To him, God is a friend…his very best friend. He has a strong Christian walk, and loves 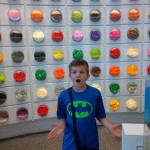 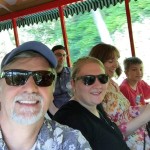 to talk to others about the Lord. The most important thing to Topher is to do the right thing in God’s eyes. Would that all people felt the same. I think this world would be a much better place. Strong Christian values are of the utmost importance to our world, and in our own lives. And Topher has those values. We are all very proud of him. Today is Topher’s 10th birthday…and, he got to go to Disneyland with his mom, and grandparents, Warren and Diane Beach. What a great birthday present for a ten year old boy!! Happy birthday Topher!! I hope your trip is amazing. Have a great day!! We love you!!

One Response to Best Buddy