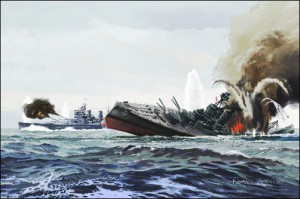 Growing up, our house was often filled with country music. Some of it my sisters and I liked, and some we didn’t. We were, after all, a part of the Rock and Roll era. Of those songs, I really liked the ones that told a story the best…still do in fact, especially when it concerns historical events. One song that we heard many times was called, “Sink the Bismarck” by Johnny Horton. It was a song with words that were easy to learn, and I quickly knew it by heart. I’ve never forgotten that song. At the time the words really meant nothing to me, but I’m sure they meant something to my dad.

The Bismarck was a German battleship. It was the first of two Bismarck class battleships built for Nazi Germany’s Kriegsmarine. Its sister ship was the Tirpitz. The two ships were the largest battleships ever built by Germany, and two of the largest built by any European power. The Bismarck was named for Chancellor Otto von Bismarck, the primary force behind the unification of Germany in 1871. It was commissioned on August 24, 1940. These ships had huge guns…according to the song, “guns as big as steers 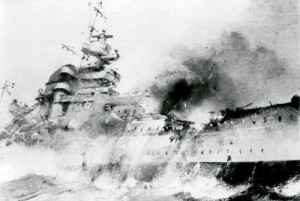 and shells as big as trees.” The Bismarck had been dubbed the “Terror of the Sea.” The British generals had heard all about this ship, and there was serious cause for concern, because it could do horrible damage.

At this point in World War II, the only way move through the war zone with relative safety was to be on a U-Boat. In May 1941, the Bismarck was ordered to break out into the Atlantic. Once it was safely in the open ocean, it would be very hard to track. Then it could wreak havoc on the Allied ships. The British heard of the plans, and sent the battle cruiser Hood and the battleship Prince of Wales in hot pursuit. They caught up to the Bismarck near Iceland and a battle ensued. The Bismarck sunk the battle cruiser Hood…it would be the only ship it would ever sink. The Hood was hit, exploded, and sank, taking with it all but three of the 1,421 crewmen. The Bismarck was hit but escaped. Nevertheless, it was leaking fuel and so it fled trying for occupied France. It was spotted by British aircraft and crippled. On May 27, three warships descended on it and sunk it. 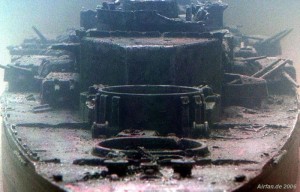 Just as the song had said, “We gotta sink the Bismarck ’cause the world depends on us.” The British navy knew that this ship had to go, because if it was left alone, it would be repaired and it would once again wreak havoc on the Allied ships. The song has always remained in my head, but once I knew about the ships and the real battle that had taken place, it meant something to me, just like it had always meant something to my dad. I knew of the sacrifices, the lives lost, and the ship lost. This song was not just about some long ago battle that the world has forgotten, but rather it is about one battle in a war that can never be forgotten. And a war that would eventually draw my dad and many of my uncles into it before it was over, because the world depended on them too.