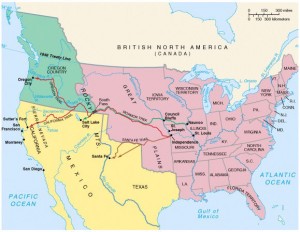 When most of us think of the pioneers traveling to the West, we think of the Gold Rush, but that was not the original reason the pioneers left the East. The East had become crowded. The availability of farm land was very scarce, and soon the crowded conditions became unbearable for many people. The West offered wide open spaces, farm land, and new scenery. It was the perfect solution for the city cramped, lovers of the wide open spaces. The biggest problem with the move West was the land disputes that existed. The British wanted to claim the land because they had reached it by sea, but Lewis and Clark were the first to make a land crossing. Russia and Spain had tried to claim ownership, but that fight was settled by treaty. Still the battle for Oregon remained for a time, between Great Britain and the United States of America. Of course, in the end the United States would win in that battle, as they had for their freedom from Great Britain years before. This land would belong to the United States of America, from Texas to Canada, and Maine to California.

The Oregon trail was used for eight decades as the 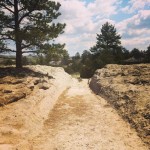 natural corridor between east and west during the 1800s. The trail runs approximately 2,000 miles from Independence, Missouri to Oregon City, Oregon. It also sports spur trails to Salt Lake City, which was used when the Mormon people began moving there to escape what they felt was religious persecution, and to California, which kicked off during the gold rush. Originally, however, the Oregon Trail was a series of unconnected trails used by the Indians. The Fur Traders expanded the route for the purpose of transporting pelts to trading ports and rendezvous, but the main usage of the Oregon Trail came when a series of economic and political events converged in the 1840s to start a large scale migration west. And oddly, it had nothing to do with gold.

As my sisters and I were going through our parents’ things this past weekend, we came across a book about the Oregon Trail. It brought back so many memories of our family vacations, and just how excited Dad and Mom got about seeing an Oregon Trail marker. I ended up with the book, and as I was looking through it, the memories continued to flow, but what was missing was the reason the pioneers went to Oregon in the first place. I’m not sure why I didn’t know exactly, because I’m sure my Dad would 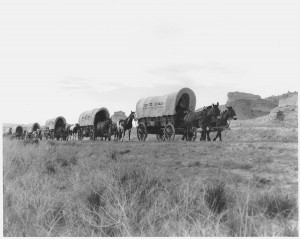 have told us, and I’m equally sure that it was in my history books. Of course, both of those sources would have required me to listen to them, and history was not really of interest to me then…ironic isn’t it? Nevertheless, the good news is that it is never to late to learn, and this week I learned something new about all those Oregon Trail monuments Dad and Mom took us to, and the significance they had on this nation…and even my own life. The ruts I’ve seen mean more to me now, and maybe I’ll have to go see them again, and if I get real ambitious, maybe Bob and I will have a new trail to think about conquering. I wonder what he will say about that idea.