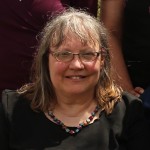 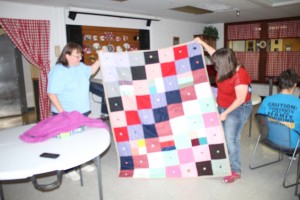 Over the years, my sister-in-law, Debbie Cook has tried her hand at a variety of different crafts. Debbie had always done a lot of sewing, and had made her daughters clothing. Sewing was never really my thing, although I could sew if I wanted to. I just never really wanted to. Debbie enjoyed it though, and the clothes she made were very nice. It was something she shared with her mother…that ability to sew and to enjoy doing it.

Debbie also took up cross stitch and for years made pictures that she sold at the many craft fairs that she and several other family members had booths at over the years. For the most part, the cross stitch projects were done by Debbie and Brenda, but there were a few others in the family, myself included. Nevertheless, Debbie made a number of sweet pictures to give as gifts to many people in the family, and we who have received them, have cherished them ever since we got them.

More recently, Debbie got into quilting, and like most people who find that they like quilting, she found that it was maybe her calling. I’m not sure when she got started exactly, but I remember that while her dad, Walter 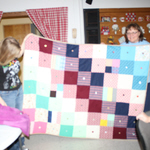 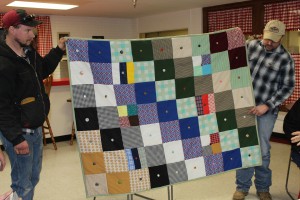 Schulenberg was alive, she made a quilt for him. I don’t recall exactly if she made the original one for him, but I think she did, and then, because of how cold he always got, she actually took it apart and turned it into two lap quilts. Now that ability really impressed me. It is one thing to make a quilt, but then to alter the quilt in such a way…well, that takes a degree of talent, especially when the quilt had the frayed edges that are so popular these days.

After Dad’s passing, we, the kids and children-in-law, decided that since Mom was in a nursing home now, we wanted to turn their old clothes into quilts to be cherished memories for all of us. We weren’t sure how big they would be able to be, and we had asked a family friend, Linda Hall to make the ones for the five living children. Then Debbie approached me and said that she had really wanted to help with those, so it was decided that she would use part of the material to make memory quilts for the grandchildren. Those were exciting days of anticipation for the children and the grandchildren. It was such a great idea that my sister-in-law, Brenda Schulenberg had come up with.

All of the quilts were finished between Thanksgiving and mid-January. They were such a blessing to receive. 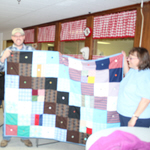 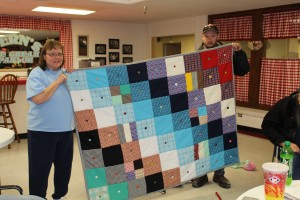 Both of the girls did a wonderful job on them. Debbie has now decided that she wants to make a set for the great grandchildren, and we are all looking forward to seeing those too. What a blessing that will be for the great grandchildren, some of whom have never even met their great grandfather, or their great great grandparents, whose clothes will also be used in these, but will now have a memory of them anyway. We can’t wait. Today is Debbie’s birthday. Happy birthday Debbie!! Have a great day!! We love you!!