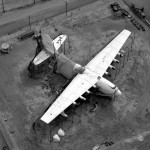 7 Responses to The Spruce Goose