From That Day On 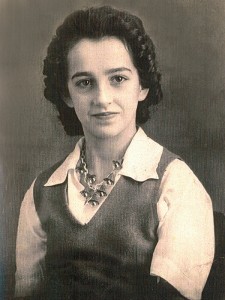 My aunt, Virginia Byer Beadle was always a beautiful girl, with lovely hair…and this was according to anyone who knew her. From the time she was a young girl and on into her golden years, that fact has not changed. It was quite likely the first thing people noticed about her. Her hair, at least until it turned gray, was a jet black color, and always in curls. I don’t know if her curls are natural or not, but I don’t remember ever seeing her without them.

One time, her sister, my Aunt Evelyn, and Aunt Virginia were supposed to clean up the house, but Aunt Evelyn had been babysitting the night before…all night, and the baby was fussy. As is typical with siblings when they are young, Aunt Virginia wanted to know why her sister was sleeping rather than helping. When she was told that Aunt Evelyn had babysat all night, Aunt Virginia said, “So then if I have a job, you are saying that I won’t have to do housework either?” Now I have to assume that it was Grandma that she was talking to, but the answer was, “No, you wouldn’t.” I don’t know what they expected to happen, but needless to say, Aunt Virginia went out and got herself a job, and she had one from that day on.

When the time came for Aunt Virginia to learn to drive…well, the family got a real education on just how you didn’t want to drive. It seems that every time Aunt Virginia backed out of a parking spot, she would neglect to look behind her and in the end hit probably half a dozen 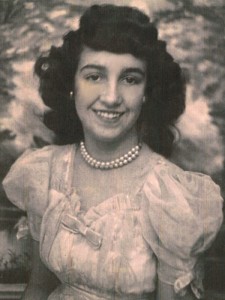 cars. My mom didn’t say how much damage or how the cars got fixed, or even if the police were called, but she did say that every time Aunt Virginia got behind the wheel the rest of the block cringed. Personally, I wouldn’t park behind her, but that’s just me. Eventually she figured it out, and I haven’t heard that she is such a bad driver now.

After Aunt Virginia got married and moved to her apartment, my mom took to going over and spending the night of and on. In fact, she stayed there quite a lot. It would be those nights spent at her sister’s apartment that would precipitate the marriage of my parents, because my dad was a friend of Aunt Virginia and Uncle Jim’s. For her part in our parents meeting, my sisters and I will always be grateful. Today is Aunt Virginia’s 84th birthday. Happy birthday Aunt Virginia!! Have a wonderful day!! We love you!!