While my dad was in England fighting in World War II, his brother and sisters were working in the shipyards helping with the war effort there. On their days off, the workers at the shipyards liked to go and picnic in the area parks or a friends cabin. There was usually a group of young men and women that would go on these picnics, and Aunt Ruth and Uncle Bill were among them. In an effort to make my dad feel like he was a part of things back home, they would send him pictures of the things that were going on with them back home. Dad enjoyed the pictures from home immensely, but that didn’t stop him from being the typical big brother.

While Dad was in England, letters from home were like a lifeline. Those men were lonely and homesick. They depended on those letters from family and friends to help them get

through that time of uncertainty and the ugliness of war. I have been reading his letters home for some time now, and while some of the letters reveal the loneliness that can only be seen if you read between the lines, others are more about having a little fun teasing his siblings, and especially his little sister, Ruth. Of course, you’ll have to admit, that she really walked right into it, but like any 18 year old girl, she probably didn’t realize what would come back to her.

Aunt Ruth wrote a letter to my dad, her brother, Allen, told him a little bit about this boy named Selmer that she obviously liked, and included a picture of Selmer kissing her. Well, my dad couldn’t let that one slide. This was his little sister, and she was growing up too fast for his liking. And who was this guy kissing her anyway? Dad remarked on how unusual the guy’s name was, and teased his sister about whether the guy was kissing her or looking at her locket, pretty much settling on the former thought. He teased her about the fact that she had apparently been telling him that she didn’t have any boyfriends, but clearly she did. And then, out came the big brother in my dad, when he told his little sister that this guy had “all the earmarks of a wolf” as far as he could see. 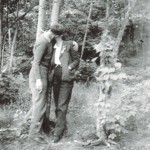 Now, all the rest of the teasing aside, I had to laugh at that part of the letter. A wolf!! I know that many people wouldn’t really understand the significance of that remark, but we…in this family…totally get it. It was almost as if my dad was predicting the future. Did Aunt Ruth marry Selmer? No, she didn’t! The prediction that my dad spoke, without realizing it, had more to do with the word than the man. You see, when my Aunt Ruth did get married, it was to a man named Lester (Jim) Wolfe!! So, while Selmer didn’t turn out to be the wolf my dad predicted, I guess my Uncle Jim Wolfe did, and that wolf literally swept my Aunt Ruth off her feet.