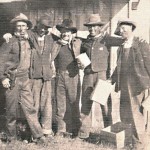 We have all watched old Western shows, and the cowboys always seem to look very romantic…at least for the period of history they lived in, but the reality was not exactly like that.  Now, I can’t say for sure that none of the cowboys of that day looked like that, but the majority of those men were hard working homesteaders, who lived in an era where there was no running water, and all too often the water they had was needed for crops. The land was hard and dry, and tough to work, because it had never had crops planted in it before. There were rocks to be removed before the land could even be tilled. This was the world our ancestors lived in…if they came out to the wild west, like mine did.

Now don’t get me wrong…they did their best to clean up, when they cleaned up, and they looked real good, but the daily shower that we take for granted, was not possible in those days. Often the same water was used for more than one person, and you had to hope that you weren’t going to be the last one. The cowboys of the old west took a weekly bath and washed their hair every couple of weeks…most of the time…or sometimes anyway. They did not understand hygiene, because no one really knew anything about that then. 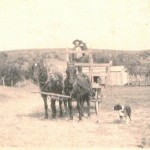 And they couldn’t have done much about it if they had, without any running water.

The roads were dirt, the land was dusty, the sun was hot, and the people…well, the people were as clean as they could be under the circumstances, but since the only odor improving items were the perfumes that the women used very sparingly, people just got used to the odors that existed. They were around horses and cows all day, and they had to clean up after those animals. It wasn’t their fault, and there really was nothing that they could have done about it in most cases…it was just the way it really was in the old west, and they were the real cowboys.