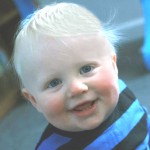 Brian, who is the 14 month old son of my cousin, Alicia and her husband, Jordan, is a curious little boy, not unlike most boys his age. I am always amazed at the things that catch the eye of little kids. Things we adults would most likely never notice, seem somehow special and interesting to them. Add to that, the fact that Brian is a boy, and you will find that the things that will interest him will be the bug, worm, or as in Brian’s case…the toad.

While taking in some fresh air and sunshine in their back yard, Brian came upon his first toad. He pointed at it and said, “Mom! This?” Either he was asking her what it was, or wanted her to look at it, and it doesn’t really matter, because it is just the 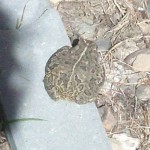 beginning of his boyhood curiosity, and this is a question Alicia will hear over and over again. I told Alicia that her days of finding toads and other such friends in her son’s pants pocket were probably not too far off. It does make me thankful that I had daughters, although my grandsons broke me in on the various items in their pockets and in their hands. Some, I would rather not think about!!!

As I looked at the picture of the toad, my mind went back to when I was a kid. I remember hunting for toads too. And I remember having one that was in a box, but I am quite certain that I would never have picked up that toad, so maybe one of my male cousins put it in the box for me, or maybe my memory is of looking at a toad in a box that belonged to one of my male cousins. Whatever my memory 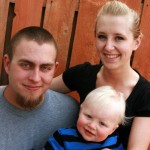 of the toad was, I do remember touching the toad…briefly. Its skin was rough and scratchy. I also remember thinking that it was odd that the toad didn’t try to get away from my touch…almost like they enjoy that touch, like a cat does.

Little Brian is just beginning his years of curiosity about the animal kingdom, and it is my guess that he will have many more memories of that type than I ever did, since I tried very hard to stay as far away from bugs and amphibians as I could. If Brian is the boy I expect that he will be, he will try to be around them much of his young life…until he discovers girls, that is.

One Response to Toad Hunting