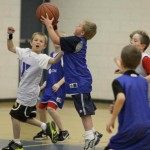 My grand nephew, Xander is the oldest of the five children of my niece, Jenny and her husband, Steve. He takes his job as the first born very seriously. Like any kid, he has his fights with his two brothers, but that has nothing to do with his duties as the big brother. They are his little brothers and his little sister, and they are his top priority. Xander is wise beyond his years and knows the value of life…possibly because he has already experienced loss in his young life, having lost his sister, Laila when she was 18 days old and he was seven years old. It was an event that made his tender heart break. Now, like his brothers, he brings little gifts to the sister he won’t get to know on this Earth, because his big brother’s heart feels so much love for her. 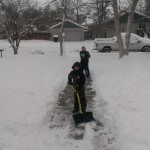 As the oldest child, Xander tries to always be a good role model for his younger siblings. That means studying hard and getting good grades, so he can encourage them to do the same. It also means that he works hard at whatever job he is doing, because he knows that it is the right thing to do…to always do your very best work. So that’s what he does whenever he is asked to help out around the house…he works hard at it and does the job right. And it means that Xander stays out of trouble, because how can a big brother be a good role model for his younger siblings, if he is getting in trouble all the time. He is the kind of boy who makes his parents proud, and makes his brothers want to be just like him. He is a good and loving boy. 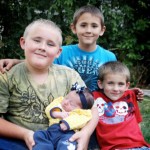 In his leisure time, Xander participates is sports…of all kinds. He likes to play football and basketball. He also studies Tae kwon do. He likes to ride motorcycles and snowmobiles. He’s tried lots of sports, but football is his very favorite. Like his dad, he also loves guns, and loves to go out the range to do some shooting. Of course, any guy who likes gun, likes to hunt, and Xander is no exception. After passing his Hunter Safety Course in mid-March, I’m sure that he is very excited to go hunting with his dad this fall.  All in all, Xander is just an all around boy. Today is Xander’s birthday. Happy birthday Xander!! We love you very much!! Have a great  10th birthday!!