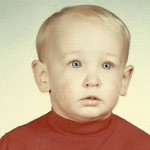 One Response to Kid Brother