The B-17’s and B-25’s are back in town again this week, and of course, they always put me in mind of my dad. I can’t see one in the newspaper, or flying over without thinking of him. Dad was a Top Turret Gunner and Flight Engineer on a B-17 G Bomber during World War II. In his letters to his mom, he was so excited to be on this brand new plane that had never been used by any other crew. He was impressed with the ability of this plane, and felt very safe and secure when flying around in it. As a young man in the war, he was excited, and yet cautious, of course, because he was flying into combat zones, after all.

I can just imagine how he felt when he was flying in the B-17G Bomber, because he grew up working on things around the farm, and loving the train rides he got to take, and then working on planes at Douglas Aircraft Company, so actually flying around in something he knew so much about, had to be exciting. And then to have it be brand new…well, not many people had that opportunity in those days. My guess is that it was a good thing that they

were already in the air, because otherwise he would have been floating around in the clouds without his crew. The feeling behind his letters gave a little view of just how excited he really was.

When the B-17G Bombers and the B-25’s came into town in August of 2007, Dad and I went out to go through them. Dad wasn’t feeling very well by that time, as he passed away in December of that same year, and somehow in my excitement in taking him out to see his beloved planes, I missed that little fact…at lease until I looked at some of the pictures I took, which showed a tired version of my dad that shocked me some. Nevertheless, we went, and Dad really did have a wonderful time. We took our time, and he told me so much about the time he spent in those planes. You could see just how he felt about them, because it was written on his face, and it was very obvious in his voice. He still loved those planes. They were a part of him, and he was a part of them. You can’t separate such a life changing event from the person who lived it. It changes them, and shapes them into the person they become. 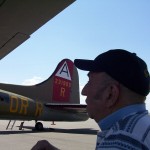 My dad was a deeply caring, loving person, who always put the feelings and needs of others ahead of his own needs. He worried about his mom worrying about him, so he tried to reassure her at every turn. He was a man who loved God and brought his children up in the Lord, and a man who deeply loved his wife, our mother. He was a man who showed his love to those he loved, and taught them to love others and especially one another. He hated anger and fights, and taught us to forgive. Dads just don’t come better. The B-17G Bombers and the B-25’s will head out of town soon, and while I haven’t gone out to see them since my dad went home, the memories will last a lifetime.