A Deer In The Family 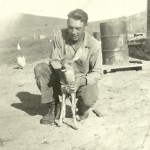 Once in a while, you get the chance to rescue a wild animal, and in an even more rare situation, you might get the chance to raise that animal, usually a baby who has lost its mother, and really has no way to survive on its own. That situation came about for my father-in-law back in about 1946, when a baby deer found its way not only into his care…not only into his heart, but into the family.

My father-in-law has always had a soft heart, and when he found this baby, whose mom was dead, and who was in a lot of trouble out there all by himself…well, he took him in and raised him. The deer settled right in and became part of the family. He revelled in the attention he got from everyone. I suppose the deer thought that my father-in-law was his parent, I mean, what else did he know, except that this person fed him and took care of him…just like a parent would do.

The deer was a part of the family for 2 years, during which time he was included in pictures with the family, and was even photographed by himself, sitting on the hood of a tractor. No he didn’t get there my himself. My father-in-law lifted him up there for the picture, but 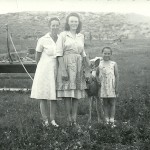 the deer didn’t see anything wrong with such a thing. He had become so much a part of the family, that he figured that was right where he should be.

The deer shared in their lives for 2 years before they decided that he was ready to be released back into the wild, and once they let him go, they never saw him again. My father-in-law figures that he was probably shot by a hunter, but while I am not against hunting, I have to hope that this little darling somehow got lucky and didn’t end up on someone’s table somewhere. He is just too cute and too sweet to think that he was hunted, killed and eaten. Just my opinion.