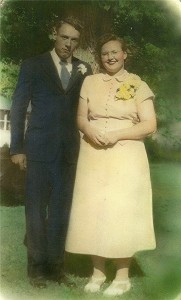 My mother-in-law and father-in-law have known each other for a lifetime. Their mothers, Nettie and Vina were friends when the kids, Walt and Joann were just toddlers. Nettie and Vina became friends and spent time together while their husbands worked on the ranch. At that time Walt was 3 and Joann was 1. When nap time rolled around, they would put both babies in the same crib, and so years before they would marry, Walt and Joann slept together, a fact which has been laughed about by their family members ever since, much to the chagrin of Joann, who was never sure she thought that type of teasing was very funny.

My father-in-law speaks proudly of the years of marriage that they have mastered…63 years today. All those years of working together, raising a family, weathering the storms of life and loss, and making the journey toward growing old together. So many plans, so many dreams. A lifetime of making plans. For most of those years, my mother-in-law kept the house, and my father-in-law worked. It was the way many it was back in the late 40’s and early 50’s…before women’s lib and feminism came into being and so many women turned to careers. I’m not saying it was better or worse then…just a different time. And it was the way my in-laws wanted their life to be.

As with many things in life, sometimes things don’t turn out just exactly as you had planned. My mother-in-law was diagnosed with Alzheimer’s Disease in about 2004, and since that time her abilities have deteriorated…but not the love that has endured through all the trials, all the difficult times, the loss of daughter, and granddaughter, and parents. The love has endured. Now that my mother-in-law is no longer able to do the cooking and washing, my father-in-law has taken over those duties.

People never know how they will react to the illness of a loved one…especially long term illness. Some people leave, but most long term marriage partners stay. Still, not all people with an illness like Alzheimer’s Disease can expect to be living at home with the one they love. So many partners feel like they have already lost their loved one, so a nursing home won’t matter. And so many people have no other options, because there is not enough help. And even though they love their spouse, there are no other choices. It is a difficult 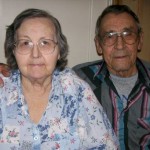 decision to make and one that could still be in my in-laws’ future. There is no right or wrong choice…just no other choice.

No matter what the future holds for my mother-in-law and father-in-law, I know that their love will endure. When she no longer knows who he is or who her children are…the love will endure. He will still go see her as often as he can get someone to take him, because she is the other half of him…she is the heart of him. When she is ill, he worries, when she is difficult, he sweet talks her (after he fights with her a little), when she is having a good day, he praises her…because after all these years, the love endures.