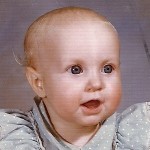 When Amy was 3 months old, we found out that she would probably never reach 5 feet. I know that at 3 months that hardly seems like something anyone could predict, but she had not grown at all since she was 6 weeks old, and my doctor being a seasoned pediatrician, and after examining her, concluded that, “If she reached 5 feet, he would be surprised. Well, he was right, and today my little girl is a 4 foot 11 inch adult. But don’t think she is a wimp, because you would be wrong.

Amy had her little blond moments as a child, like the time she brought the outfit she wanted to wear out to the kitchen and put it on. Then she started looking around for something…all over the kitchen. Finally I said, “What are you looking for?” She answered, “My shirt!!” I answered, “You have it on!!” She looked down in total surprise to find the shirt on, just like I had said. She did have her blond moments.

And then there was the time that we were walking into Kmart. Amy was about 3 or so. She was just ahead of me as we walked through the parking lot, and she always had a tendency to look behind her or around herself and she walked forward. So, suddenly I hollered to her to look where she was going, but it was too late…Amy walked right into the bumper of a parked car. She wasn’t hurt, but I found myself having a hard time not laughing about it.

All kidding aside though, our little blond is a very capable, and really not blond-like most of the time, adult, who is a great help to me. I might tease her a little, but I don’t know what I would ever do without her. Amy and her sister are two people I can count on…no matter what I have to ask them to do. The life of a caregiver, which both of my daughters are, is a tough one, and those who have not been there, don’t understand. Many people would not take on the challenges of caregiving, but when the needs arose, my girls were there for 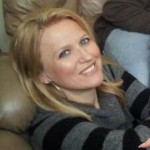 me, and their grandparents, on both sides. They know what it takes, and they don’t give up. Ever!! That is…priceless!! I know that those commercials are done in a joking way, but really, all joking aside…my girls are priceless!!

When they say that big things can come in small packages, it was Amy that they had in mind. And I am so blessed. How could I have been so blessed? It is a question for which there is no answer. Today is our precious little blond’s birthday, and I can’t say enough about what a wonderful honor it is to be her mom. Happy birthday dear Amy!! We love you very much!!

2 Responses to Our Little Blond