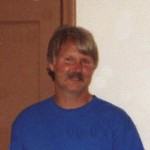 My dad became ill on a trip back to his place of birth and the surrounding area. His plan, after a quick trip around Lake Superior, was to spend some quality time with his older brother, my Uncle Bill. Unfortunately, while Dad, Mom, and my sister, Cheryl were on the road to Thunder Bay, Ontario, Canada, they had stopped at the Terry Fox Monument and Dad was hit with a serious Pancreatitis attack. This illness and other complications would put Dad in the hospital for the next 4 months, and send him home very weak, and needing much care from his loving family before he would recover. Still, he would never be the same again…except mentally, of course. His body was never as strong, and he never drove again, and needed Intravenous Feeding, and oxygen off and on. These things together would make another trip to Wisconsin almost impossible, and he never went back.

Dad’s brother, my Uncle Bill was older than Dad was, and even less able to drive, but otherwise healthy. We knew that the only way they were ever going to see each other again, was for Uncle Bill to come here. Still, that was going to be a huge undertaking, and we didn’t know if it would ever happen. Enter, my cousin Bill. Bill contacted us and said that he planned to bring his family to see Yellowstone National Park, and he thought he would bring his dad, my Uncle Bill out to see his brother, my dad. We were very excited, especially my dad. The plan was for all of them to spend a day or so here, then Uncle Bill would stay with my parents while Bill and his family went on to Yellowstone for a time and then come back for a few days before leaving for home. 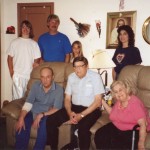 This was a blessing beyond measure for my dad and my Uncle Bill, and a wonderful gift for Bill and his family to give them. It was a pure act of love from Bill toward his dad and his uncle, my dad, and one that will never be forgotten. Bill has always been a sweet, thoughtful person, as anyone who knows him can attest to, and the love he has for his dad is very evident. I will never forget that visit, nor will I ever forget the fact the Bill made it possible for his dad and mine to see each other one last time before my dad passed away. Bill you are a great person and I am forever grateful for the wonderful gift you gave our dads.  Happy birthday Bill!! We love you very much!!