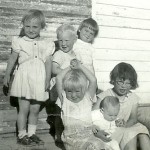 Being the only boy in the family had to be somewhat hard for Bob, when he was little. Bob was the first boy born among the grandchildren on both sides of his family. And when that happens…well, we all know how bossy a group of girls can be when there is only one boy in the bunch…especially when he is among the younger children.

I have little proof that Bob was bossed around by the girls, except that…well, being a girl myself, I know that against 5 girls, one little boy would find himself in a situation that was…impossible to be the boss of. And little girls can and do find as many ways to get into lots of trouble as boys do, but with only one little boy in the crowd, guess who will get the blame 9 times out of 10.

I can imagine how my husband, as a little boy, must have felt when the girls told his mom that it was all his idea or that he did it. Bewilderment set in, I’m sure, as he tried to figure out what had just happened, because something most certainly happened, and it wasn’t good. That is a fairly common scenario in the interactions between little boys and little girls. The girls aren’t being mean, it’s just that he was the easiest way out of trouble. I can’t say for sure, but I can see that his big sister, at least, was trying to get something straightened out, make Bob do or say something that he wasn’t cooperating with.

Of course, it’s entirely possible that being the only boy in the crowd isn’t such a bad thing. Sometimes, it’s quite likely that the girls treated him like the baby, especially when they

were playing house. And if that meant making him some dinner, I’m sure that went over well, especially since dinner probably meant cookies, or some other such treat. That would make acting like a baby worth while. Besides, it’s never a bad thing for a guy to have a bunch of girls waiting on him hand and foot…right?

Being the only boy is a group of girls has it’s ups and downs, but I suppose there could be worse things in life. And from the looks of things, I don’t think it was something Bob minded very much…most of the time. In fact, knowing my husband, my guess is that most of the time he thought the whole thing was just fine by him….most of the time.