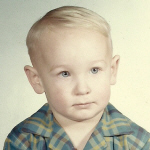 When my brother-in-law, Ron was little, it seemed like he would always be too little to help out much with things in the garage, and other mechanical areas of the place they lived. It was a frustrating thing to him to always be told, to go in the house, or go play, or stay out of the way. He wanted to be a mechanic…just like the big guys were.  He was sure he knew how to do stuff, but he just never seemed to get the chance. He did his best to be grown up…even trying to get to be as tall as me…which wasn’t saying much, but somehow struck him as being big at the time. Ron was younger than Bob by 14 years, and the rest of the kids were girls…who as we all know, do nothing that is interesting to a little boy.

As Ron grew up, of course, there began to be more jobs for him to do than he probably wanted to have. That happens with most kids. What seemed like the coolest thing to do in our early lives, is in reality, work, and not fun at all. Still, there were jobs that Ron really liked to do. One of them was moving snow around the place with the tractor. Having driven a tractor quite a bit, I can relate to the fact that it is a fun thing to do. Of course, it can have it’s down side too, as Ron can tell you. One time on Thanksgiving Day, Ron was moving the snow off the driveway, and the tractor got stuck in the snow. Ron stepped up on the tire to try to get it moving, and…well, it moved alright…right over his leg!!

Bob was working that Thanksgiving Day, and my girls and I were running late getting to my in-laws for Thanksgiving dinner. When we pulled up, I saw my father-in-law carrying ny nephew Barry, into the house, and several other people were with him. What struck me as odd…the fact that no one said one word to me. I thought, “Wow!! I’m not that late, am I?” The truth was, it was not my 2 year old nephew, Barry that my father-in-law was carrying into the house…it was my 12 year old brother-in-law, Ron, who had broken his leg. How 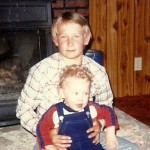 Ron could have looked like Barry to me is still a mystery to me. I suppose it was because I couldn’t wrap my mind around the idea of my father-in-law carrying my 12 year old brother-in-law.

Needless to say, it was a rather strange Thanksgiving dinner. My in-laws took Ron to the hospital, and the rest of the family ate a rather subdued Thanksgiving dinner without them. When we next saw Ron, his entire leg was in a cast and he was in a hospital room. It was a difficult 6 week for him,because that cast made it next to impossible to walk, but he was soon well again, and has had no ill effects from that terrifying experience…when the tractor went berserk. Happy birthday Ron!! Glad you’re ok!!