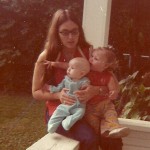 When Corrie was just a little over a year old, and Amy was just 3 months old, we took a trip to Yakima, Washington to visit Bob’s great grandmother. His great grandparents had come to Casper for a visit just 3 months earlier, and shortly after returning home, Great Grandpa passed away. He was 93 years old, and fell off a ladder while doing some repairs to the home they lived in and broke his hip. He lived an amazing life, as you can see.

When we went to visit Great Grandma, Corrie was just learning to walk. Grandma had a little chair with short legs, just the right size for a little girl. Corrie loved that chair so much. She sat on it a lot during the time that we were there. So much so, in fact, that Great Grandma decided to give the chair to Corrie, after telling us about it’s history. The chair had belonged to her 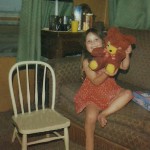 sister, and she had given it to Grandma. At the time that she gave the chair to Corrie, it was over 100 years old. That was in 1976. So that chair today is over 135 years old.

Throughout the years that chair has been a part of our lives, and has been used by many a small child. I’m sure that many of those kids would have loved to take that chair home, but I knew that it was a special gift given to Corrie, by a great great grandmother, now long since gone. Grandma passed away in early 1984 at the ripe old age of 96 years. She had continued to live alone in her own home all those years. Another amazing feat, but then she was an amazing woman.

When Corrie got married in 1993, that little chair went to a new home after all…Corrie’s. It 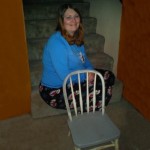 was a piece of furniture that Corrie has cherished through the years. It has had to have several paint jobs during all those years, and is in the midst of one as I write this story, but the memories that have been built around that little chair…well, if it could only talk. It has seen many a little girl, and doll sit on it for tea parties, and other little gatherings. It has been used as a little table of sorts at times, and when Corrie and Kevin had children, the little chair saw a new generation of children, this time boys get to enjoy its perfect size, as they found out that they could get up on it easily, and without any help, which was the same thing that had so attracted Corrie to it all those years ago. Not a bad life…for a little chair.