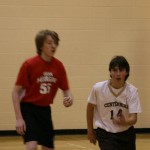 While his older brother loves football, Josh’s game is basketball. Chris was good at basketball too, but it wasn’t really important to him. Josh loves the game. And Josh is suited to the game too. He is tall and slender, and very quick on his feet. He has learned so much, this season especially. Maybe it is partly because he has a really good coach, but I think that he is coming into his own this year. He isn’t afraid to shoot the basket, like he sometimes was in the past. He knows he can do it now. Also, he is tall enough to rebound well, and steal the ball easily.

His team is undefeated so far this year. They are a formidable opponent for any team. Their coach has taught them well, and they operate as a team. They don’t care who shoots the baskets, only that each player has done his best and given it his all. That is was teamwork is all about. Each of the boys supporting the others…watching their backs. That is what I see in Josh and his team.

Josh is one of the taller boys on his team, so it makes him one of the better guards. It is very hard to shoot over him, and very easy for him to block the shots. I am amazed at how quickly he moves and how immovable he is when he is guarding. The more he plays the better he will get. Of course, that is the same for most sports. If you are dedicated and you practice, you can get better at the sports you love.

I have seen such growth in Josh this year…in more ways than just sports. Oh sure, he is 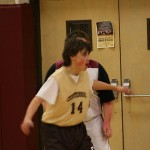 still a bit of a jokester, and he loves to pick on me…and other people, including his mom, but he just seems more grown up now. Maybe I notice it more with him because he is the youngest of my grandchildren. It’s easy to always look at the youngest child or grandchild, and think they will always be the little one. Then one day you look at them and you suddenly see them for the young adult they are. It can be quite a shock. When my grandchildren started arriving, I thought they would be little for a long time, but now suddenly they are all teenagers, even this youngest one that I have most recently discovered in no longer little, but a formidable opponent.